So I was meeting a friend of mine for lunch & somehow this restaurant was suggested after hours indecisive bantering. To be honest I didn’t know what it was (despite the fact that I am a passionate sandwich enthusiast) I think they just added the “Rockafella’s Famous Deli” part of the restaurant because it certainly doesn’t say that on the rather large sign facing the freeway. I know I shouldn’t, because there are so many other things in this world that one could attribute to “Rockefeller” but the name always evoke a nostalgic(big surprise) reminder of watching Where in the World is Carmen San Diego as a child & listening to the a capella stylings of “Rockapella” do the theme song.

I know the video quality is bad, but that was PBS when it still had massive street cred (like me). The first thing that struck me about this place was its size and the fact that it was packed on a Friday afternoon. Turns out that you can bet on horses here, which made me feel a bit awkward as I was the only one without a racing form yelling at a T.V. I sat at the bar with my lovely friend Corinne, and a whole bevy of bowling shirt wearing elderly people betting on horses. I was promptly educated by the very nice man sitting next to me who just won the “trifecta” (whatever that means) and we were swept up in the intrigue. Corrine & I bet on two different horses to win using our newly learned (and proven) betting techniques. Ok, so this isn’t like England where you can get Informative professional horse racing tips for all sorts of races all across the UK & Ireland, so I just bet on one because it wore something with a “v-neck” on it, and it’s been my personal experience that betting on V is always a good thing. We both lost, but at least we had the thrill of betting on horses for the first time in our lives. 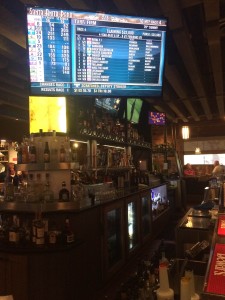 The portions here are massive, and there are more than enough New York Deli themed sandwiches to keep Sandwich Sunday going for years. the prices are a bit higher than your average sandwich spot, but it is a sit down restaurant so that’s to be expected. If you’ve got $13 to spend on a meal you’ll definitely get a meal that will keep you full for a long period of time. Corinne ordered a Greek Salad with chicken on it and she had a Tito’s vodka greyhound for dessert. 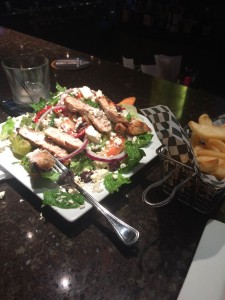 Now I’m not one to condone the eating of a salad on this blog, but the amount of chicken on here made it noteworthy enough to speak of. The picture of it was after Corrine & I started eating it, of course I still had a sandwich to eat but I did what I could. To be honest, if I was away from the judging eyes of a stunningly beautiful woman & not being distracted by conversation & horse racing, I might’ve done a better job on the salad (or at least the chicken) but I did do well on the sandwich. It was called Momz Deli Favorite (they actually spelled it with a “Z”) , which consists of a rather generous portion of pastrami(or corned beef), Russian dressing, swiss cheese, and coleslaw on rye bread. For those of you who know what a “Reuben” sandwich is (corned beef, Russian dressing, Swiss, saurkraut on rye) 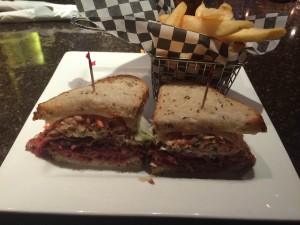 this is essentially the female version of it (called a “Rachel”). The Russian dressing was sweeter than what I though it i should’ve been, but it was quite good. There was more tomato in the sauce than I was accustomed to, but the slaw was really nice. The fries came in a little fry basket, I thought it was cute, I had to compose myself before I offered fries to Corrine (it’s not something I’m proud of). This was a fun place to go, there is a lot more going on than just the food & you can find a touch of excitement if you’re the gambling type. With the lunar New Year coming up (The year of the Goat) it would behoof (see what I did there?) you to maybe get some lucky money from a red envelope that your token Asian friend gave you to bet one some horses. I promise you, I will eventually win.

P.S. sorry I’m posting this late, It was my birthday & I was too busy gorging myself the whole weekend. I started sweating while typing this. Don’t judge me.