One of the beauties of working at a restaurant is that you tend to meet people who are also passionate about food.Kenny, one of the sous chefs at my job was celebrating a birthday (only several days after mine) and I apparently didn’t piss him off enough at work with dish modifications so he invited my to Shuck Oyster Bar in Costa Mesa.

This is one of the many small specialty food spots that is part of the OC mix in Costa Mesa, a shopping center full of little boutique shops. Shuck hasits own small charm that fits well with the seafood theme without looking like the inside of a pirate ship.  We Naturally started with several orders of oysters accompanied by the usual suspect and eventually found ourselves ordering all the sandwiches on the menu (along with a couple other things).

I should preface this by saying that I don’t mind eating oysters, but they’re not something that I would go out of my way to eat (more times than not it’s an excuse to use the horseradish & cocktail sauce on other things). The oyster Po’boy was obviously a must and it didn’t disappoint. The oysters were lightly fried and served with a slightly sweet coleslaw, the sauce was really the showcase in this dish though. I wish I knew exactly what was in it but the most that I could get out of the waitress was ancho chili & egg whites. When I eventually find myself in the Southern United States I wonder how this sandwich would compare, I can’t really talk too much about it because I don’t know what a fried oyster sandwich is suppose to taste like. The oysters texture wasn’t really my thing, I think that I would’ve really loved this sandwich if oysters were a little more firm.

The most expensive sandwich on the menu was the lobster roll. I’ve had mixed feeling about lobster rolls in the past, they tend to be sparse in meat and swimming in mayo. 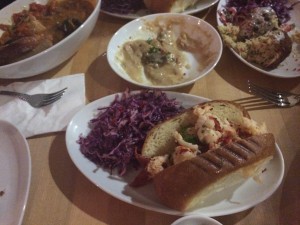 This one was not swimming in anything, in fact it was quite dry. The Brioche was cooked in a house made lobster butter and it was served with a bed of red cabbage slaw. It wasn’t a bad sandwich, the consensus on it at the table was that the bread was really good. Kenny, guest of honor brought up a good point though, If you’re going to order an expensive lobster sandwich, the bread isn’t the thing you should be impressed with. I wish I could say that this was something that I would go back for, but at the end of the day it was a lot of money to spend for something that was a tad bit unsatisfying (the lobster was a bit overcooked).

The best sandwich of the night was undoubtedly the most simple one. There was no pretension there, no overly clever preparation , and absolutely no redeeming health qualities. 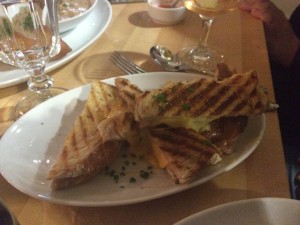 My dear friends, I salute this sandwich with the upmost respect as it is a classic from most of our childhoods. The Shuck grilled cheese sandwich was a fun & satisfying dish that was the constant pleaser at the table. There were several cheeses in there, one of which I think was gruyere (fancy) and the grill marks added some flavor to the bread. It was cut into strips, making it not only fun to eat (no boring sandwich triangles) but also easy to share.  I could tell that it was fancy, because they through chives on top of it & let’s face it, you can’t go wrong with butter & cheese. This, combined with the awesome seafood chowder & stews we had was the star of the night. After wading through an ocean  of oysters, crab cakes, lobsterwiches, & a reef of cabbage we find ourselves enjoying the familiar comforts of a landlubbing grilled cheese sandwich. This place has it’s stars on the menu, and if properly navigated it’s an enjoyable experience (especially while with great friends & conversation).

Happy Birthday Chef Kenny, your fried oysters with the Kim Chi puree was amazing at work the next day (always make friends with the chef).