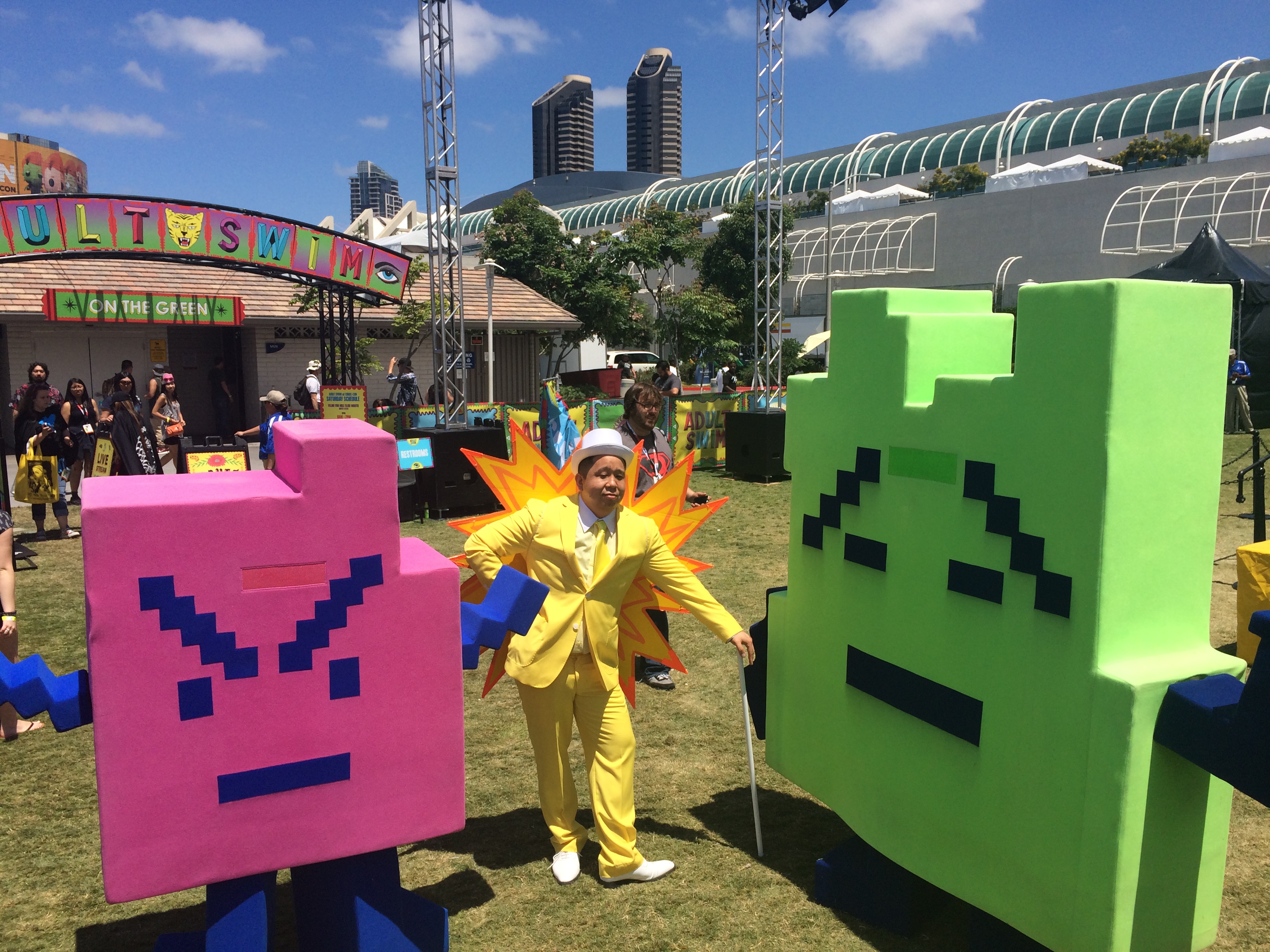 If you haven’t noticed yet, I am a big nerd. I enjoy comics, movies, dudes named Benedict Cumberbatch, games 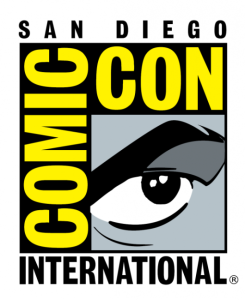 and all those things that we should’ve seemingly outgrown in our mid 20’s. I love reading blogs like https://www.flashbackcomicsandgames.com/ and knowing that there are people on the internet who share my passion for all things nerd. Luckily for me and all my friends, the landscape of being a “Nerd” has changed and has been embraced by the mainstream media. There was a time when I was a young Nerdling in Middle/High School where my love of Star Wars (amongst other things) was detrimental to my social standing. I’ve always felt a little lucky though, because I was growing up during a time where people seemed to become more understanding of “nerd culture” and I got to witness the change of it from somewhat fringe to completely mainstream. The Mecca of Nerdom for many is San Diego Comic Con, which was started in 1970 by a cabal of passionate San Diegoians?, San Diegoies?, San Diegans? It was started in 1970 by some dudes from San Diego. 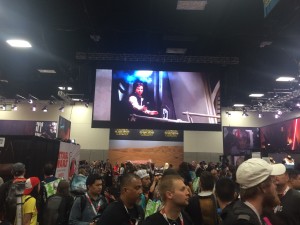 It has since become not only about comics, but about anything involving media, like Movies, games, TV, and 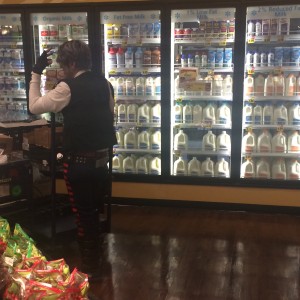 everything in between. This convention has now become a staple in mainstream entertainment, creating one of the most sought after experiences in our modern culture. I was lucky enough to get a 4 day pass this year so I headed down to San Diego with excitement and complete disregard for the funds in my bank account. I was fortunate to get a room at a Mission Bay San Diego Resort given how much demand there is at this time of year. I have been to SDCC before, but only for a day, so i never really got the full “Con” experience. Downtown San Diego transforms itself for this event every year, the Gas Lamp district 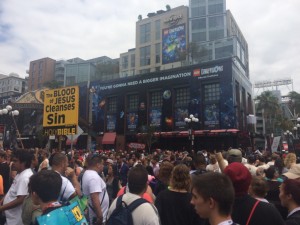 becomes a Utopia for anyone who has ever had a comic book subscription or binge watched a series on Netflix (the guy who was restocking peaches at the supermarket was dressed as Han Solo, excuse my weird stalker photo). It really is an overwhelming experience, there is so much going on all over the place that you tend to get lost in everything. You’re already inundated with all sorts of stimuli in the convention center 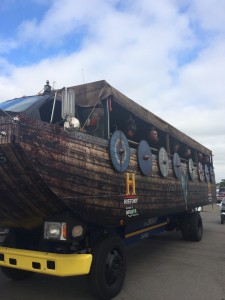 between the exhibit hall, cosplay, and panels only to be washed over in an ocean of other media outside where many gaming companies, TV networks, and evangelical Christians seek to take more of your time. I have found that a lot of the things going on in San Diego this weekend that are not part of SDCC are funner than what you can do in the convention, so even if you don’t get a ticket to the Con you should hang out in San Diego that weekend anyway. I texted my friend at 11am Saturday “I got to ride on a bus that looked like a Viking ship through downtown to the Adult Swim outdoor carnival, and I haven’t even gone to the Con yet.” That was only a modicum of activities in San Diego going on that day, there were obstacles courses for the game “Assasin’s Creed,” a promotional area for “Heroes Reborn,’ and a “Zombie Escape Room” for Call Of Duty: Black Ops III(amongst hundreds of other things). 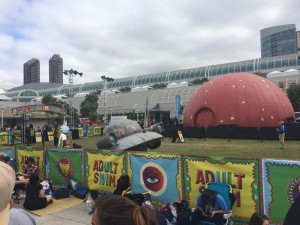 I didn’t have the rest of my friends to do the Hotline Miami 2 this time around, so I decided that I needed to find something else to dress up as. Once again I tried to find something that was recognizable enough but not so known that everyone knew who it was. That is always the trick, getting some recognition but not so much that you can’t move around without someone stopping you. I decided to do Charlie Kelly’s character from the It’s Only Sunny in Philadelphia episode “The Nightman Cometh” (otherwise known as the Dayman)
https://youtu.be/OR4zefzP7d0?t=11m2s

The costume wasn’t really one that needed too much work, other than the sun cut out (which I felt completed the ensemble). 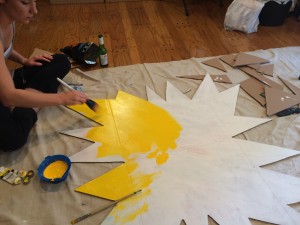 With some help from my beautiful friends, I was able to finish it pretty quickly. It was a double enforced cardboard with a layer of gesso, and then painted with acrylic paint (thank you Jaclyn & Jen for your paint and time). We decided to go with an awkward shape for the sun, because I enjoyed the way it looked and shape of the box was naturally boxy. It looks weird on it’s own, but with my body covering the middle of the sun, it ended up working out quite well. 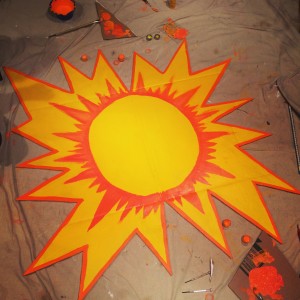 The extra color we added to the sun also gave it more shape. It kind of reminded me of a Warhammer 40k iron cross. I had to reinforce the edges of the sun rays with neon orange duct tape because the points were splitting a bit. It was good that I used the tape, because that sun was a bit big and people naturally ran into it when I was walking through crowds. Saturday came, and I put on my yellow suit unsure as to whether or not people would know who I was. I am happy to say that the outfit was a resounding success, I had an old lady at the exhibit hall come up to me and tell me that I made her day. People kept singing the Day man song to me, and I ended up dancing with the beautiful ladies of the SketchShe Youtube channel. 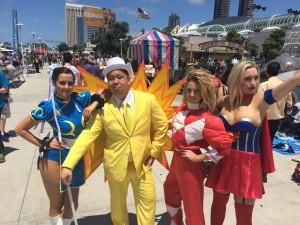 This really was my favorite day, my friend Brian and his girlfriend Lexi met up with me, and we enjoyed downtown San Diego for the rest of the day. A big thank you to those two also, I loved spending time with them and I really needed a photographer. Eventually the cutout got a bit cumbersome, so Brian was bestowed the honor of being the bearer of the sun. The four days that I was at the Con was exhausting, by Sunday I was saturated with so many geeky things that I couldn’t look at it anymore. On my way home, while stuck in traffic, I realized the error of my ways. I was exhausted, stuck on the 5 freeway, and broke and all I could think about was how I wanted to go back. The collection of weirdos, nerds, geeks, and fanboys(girls) makes for one of the most interesting and inviting groups of people I could ever interact with. I couldn’t have asked for a funner weekend, meeting new people and being surrounded by the things I love. Thank you everyone for the great weekend.

**Update**
I ended up in the SketchShe Youtube video! you can find me around 1:40! 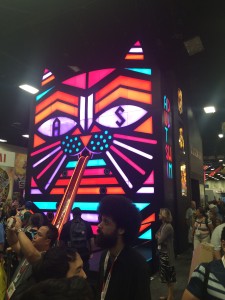 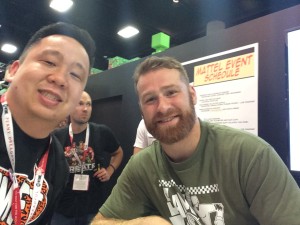 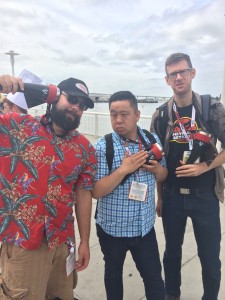 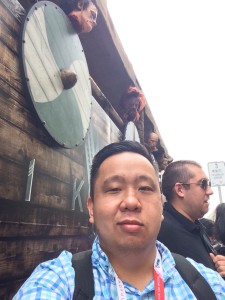 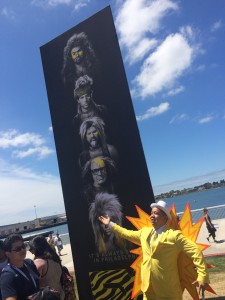