I recently spent some time in balmy Fort Lauderdale Florida, where the humidity made me feel like I was perpetually swimming, even though I was on dry land. My California weather sensibilities have made me a bit of a weakling, so I found myself hanging out mostly in air conditioned rooms hiding in mini fridges and wiping imaginary sweat from my brow. When I decided to stop being so pathetic I looked for a sandwich place that wasn’t far from my hotel, Laspadas Original Hoagies on the 17th street causeway was one of the most highly rated according to google (plus it was close by). 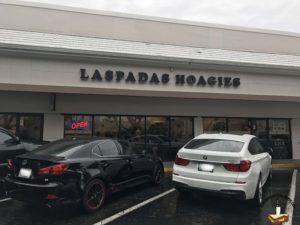 When I mustered up the courage to wade through the oppressive humidity (yeah, I said oppressive) I ubered to Laspadas, where the line almost went out the door. Thank Poseiden the line didn’t go out the door, because Tropical Storm Emily had just started & Fort Lauderdale was windy & rainy. The employees at Laspadas were working at a diligent pace, there was a rhythm to the way they were making the sandwiches. There was even a guy at a deli slicer moving to their rhythm, on occasion he would through the meat in the air and someone would catch it with the bread. This is the most sports I’ve watched in years. 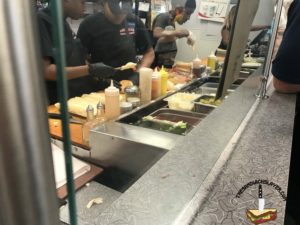 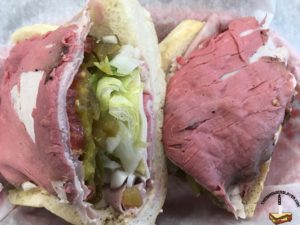 The first thing that I noticed was that this sandwich was MASSIVE. Whoever runs Laspadas is a liar, because this sandwich was anything but small. You almost have to approach it like it was open faced. This sandwich at on paper would be considered standard, but I was impressed by the flavor of their meats (more specifically, the roast beef). They also put the meat on the top and bottom of the produce, making a sandwich within a sandwich. It’s this type of forward and existential thinking that makes me happy to be alive. 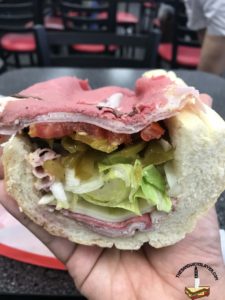 Look at that, you could swaddle a baby in there. They really make it a point to pack on the sweet and hot peppers, so be wary of that if you’re sensitive. The Italian roll they serve it on is quite good and sturdy enough to take all the briny flavors of pickles and vinegar mixed with spices. I shamefully couldn’t finish my meal and hung my head in shame (plus I was food coma-ing).

Despite the sweaty environment, Fort Lauderdale was a city and I can see myself going back. I didn’t get a chance to try a Cubano sandwich like I wanted, but Laspada’s was worth a trip.