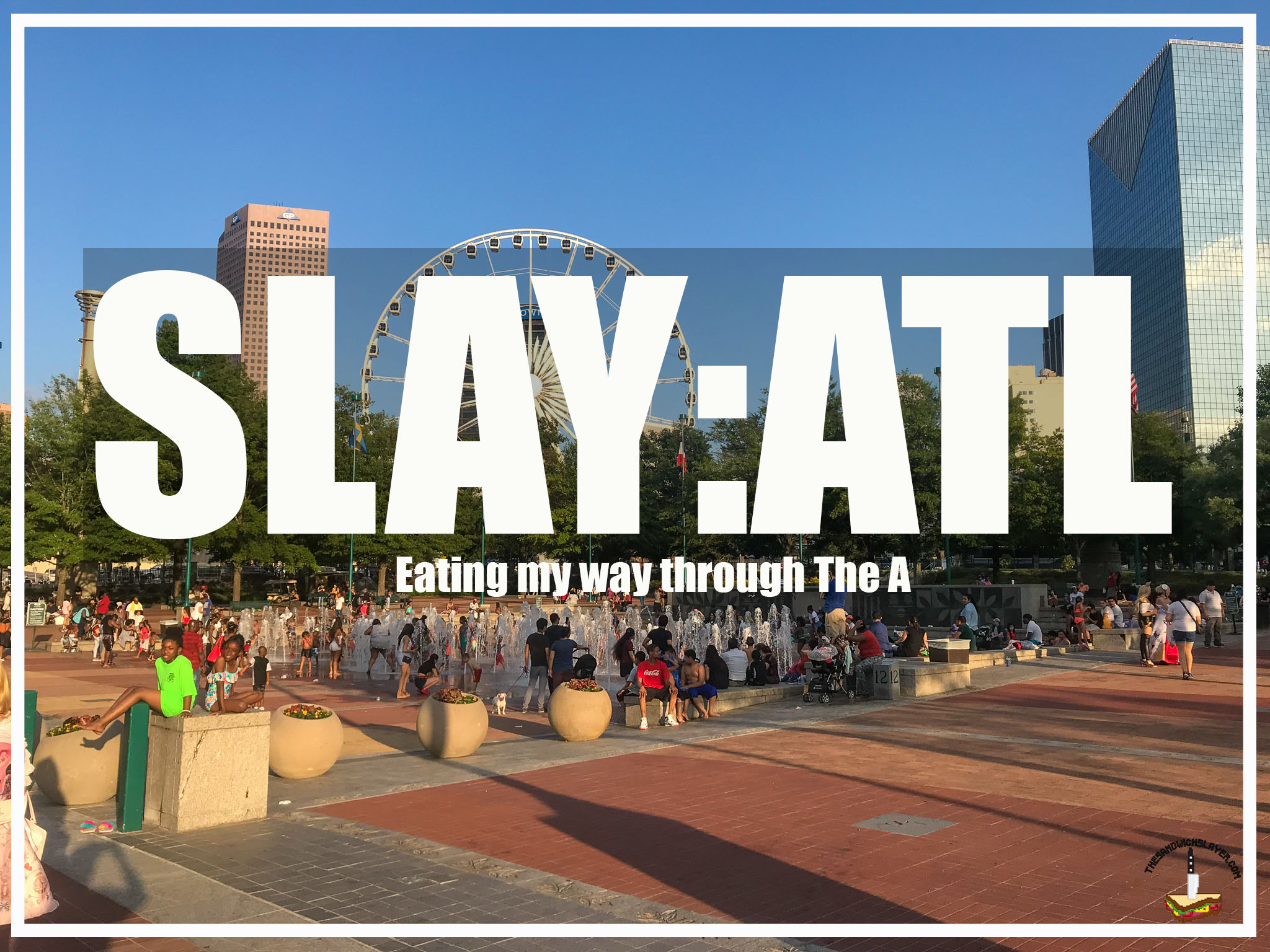 I’ve done quite a bit of traveling these past several years, trying as much food as time and finances would allow. Honestly, most places have been underwhelming. Every so often I go to a city that reminds me why I shamelessly snap photos for my Instagram. Atlanta, Georgia is a hot sweaty testament to the culinary skills of the American south. There is something about food in the South that just can’t be replicated.I didn’t get to explore as much as I wanted to (I was down there for work), but I did get a chance to try more than I normally do. This is because of my new Southern family who live locally and have a car.

First and foremost, a huge thanks to Polina, Spencer, and Chuck for the hospitality. You all truly made the weekend amazing.

Now, onto the best of my ATL food adventure:

The Pig and Pearl 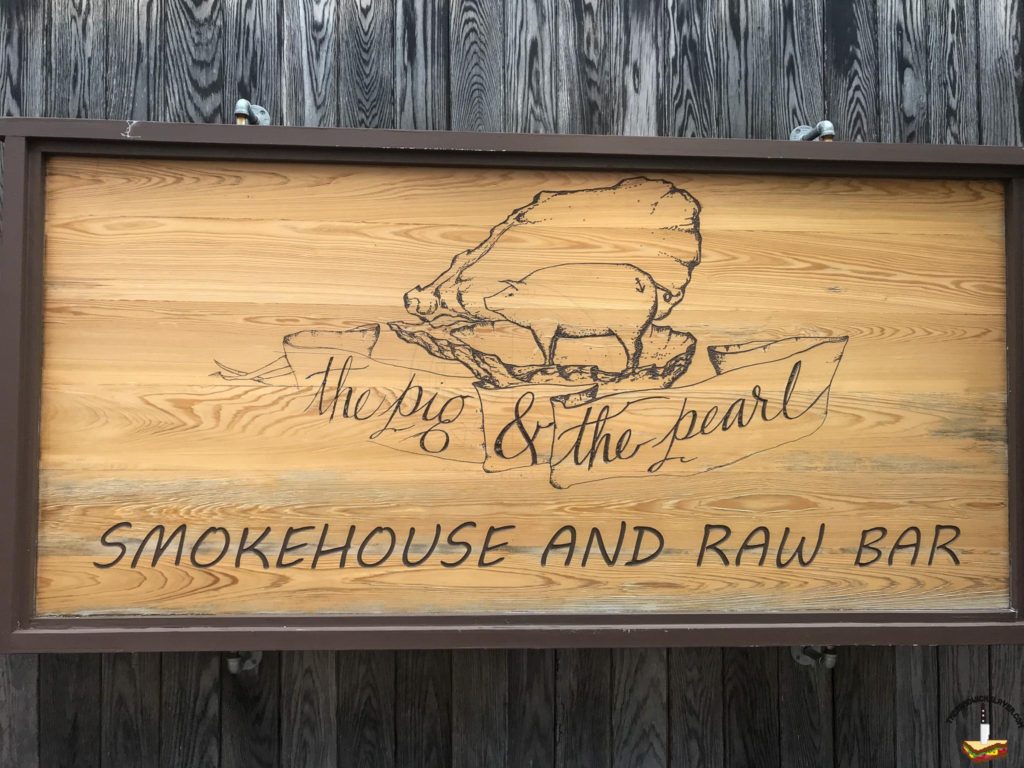 Whenever someone mentions Barbecue, a very specific image is evoked in my mind. I usually think wooden picnic tables and random leather goods on the wall with smokey scents accompanied by modern country music. To be fair, a lot of Barbecue places I’ve been to aren’t actually like that. The Pig and Pearl is probably the most upscale BBQ restaurant I’ve been to. With a clean modern look and menu, this was one of the “nicer” places I dined at whilst in Atlanta. Their respectable selection of house made BBQ sauces can keep your lunch interesting for awhile. I especially enjoyed the thick and fatty brisket sandwich with their Carolina gold sauce and white BBQ sauce. If you ever find yourself here, give the Mac and Cheese a shot and don’t sleep on the grits.

I first tried Gus’s in Austin Texas only to find out that there is one not too far from where I live in California. While I can’t vouch for the CA location, It’s been my experience that the Southern States just fry things better. Every time I’ve gone to Gus’s, there’s been a wait (a good sign) and an overwhelming desire to eat more than my body would allow. The spicy crisp batter is truly something to be marveled at and certainly beats any white suited colonel that we all know. I also had more mac and cheese with this meal (that’s gonna be a common theme while I’m in Atlanta). 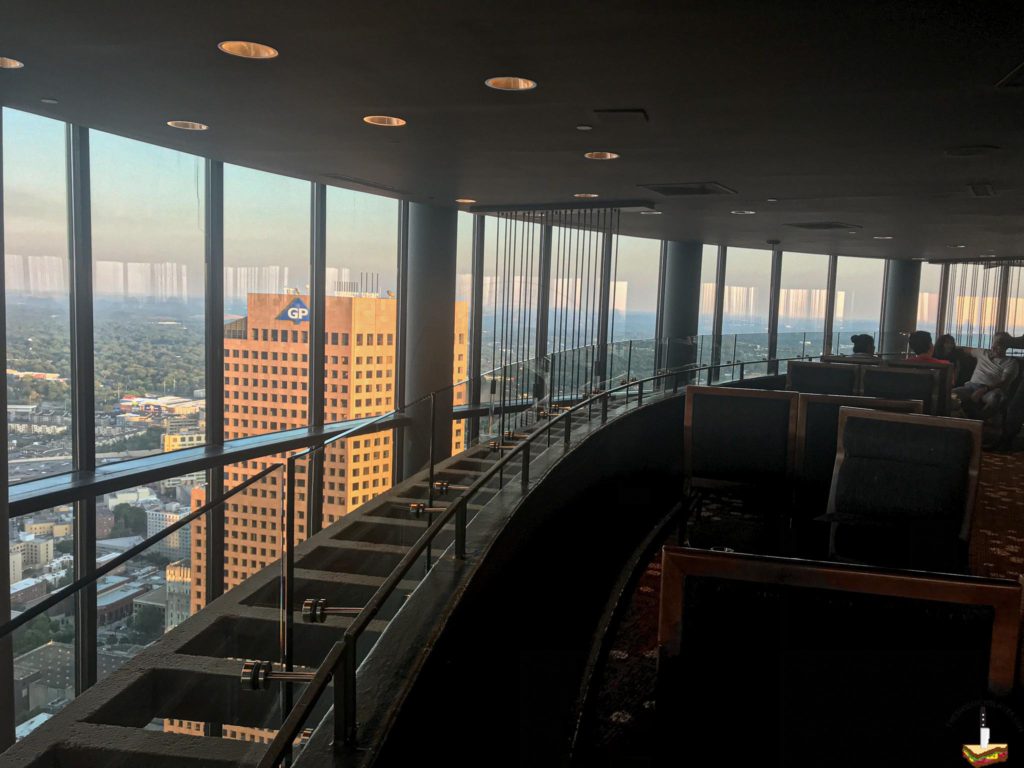 High atop the Westin Peachtree Plaza is the Sun Dial, a restaurant and lounge with a 360 degree view of Atlanta. I didn’t get a chance to eat anything in the restaurant (We weren’t really dressed for it) but the lounge and bar is well worth the trip. There are some nice libations to go with the view and some small plates to enjoy if you’re hungry, but it can get pricey, especially after paying a small entrance fee. The appetizers are decent, but come here for the drinks and the view. 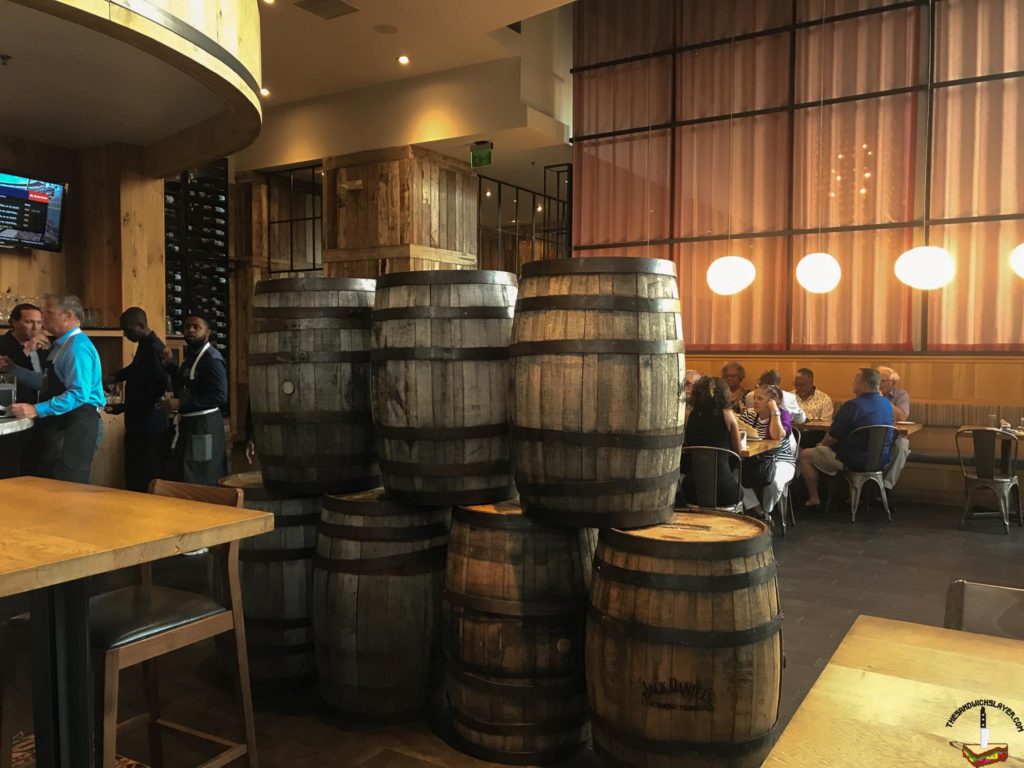 Sometime during my journey, my friend convinced me that I was fancy and rich enough to try White Oak Kitchen & Cocktails, an upscale eatery and whiskey bar. While I felt somewhat out of place wearing a snap back cap and shorts, any insecurity went away when I began to eat. We started with deviled eggs (my friend loves deviled eggs) topped with bacon, pickled onions and pickled mustard seeds. The addition of bacon added some interest textural difference, while the pickled mustard seeds and onions provided some elevated flavors to this classic dish.

The steak was good, the portions were generous, but overall pretty standard fare. What really stood out was the Honey Roasted Hakurei turnips. The sweet and meaty flavors melted together to really create some cohesion where it was needed.

The star of the show was the braised short rib with hominy, green beans, and Sungold tomatoes with natural Jus. The sweetness of the soft braised beef was lifted beautifully by the tangy tomatoes and green beans. Hominy was an interesting addition to the dish, it doesn’t add much to the flavors, but from a texture standpoint it was excellent.

Naturally, all this good food wasn’t enough for me, so I ordered a side of White Oak’s signature mac and cheese. A simple classic that wasn’t burdened by the need to be overly clever. It’s also the reason why I can say with some certainty that this was my favorite meal in Atlanta. 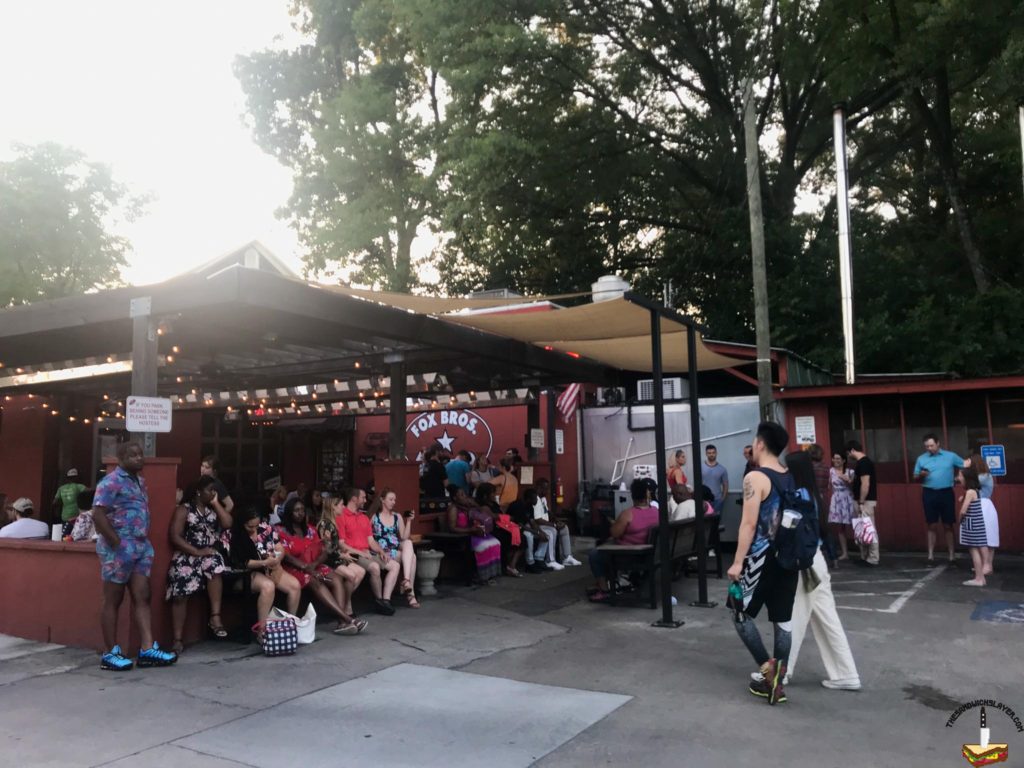 Rated as one of the top 10 BBQ places in Atlanta, Fox Bros. Bar-B-Q brings Texas Style low and slow smoking to the city. The wait was at least an hour and people happily sat in the Southern Humidity waiting patiently for it. Fox Bros was actually my last meal in Atlanta, so I indulged a bit more; A perfect way to end my trip to the south and to ensure that I weighed down the airplane just a little bit more.

The Jalapeno cornbread was some of the best I’ve ever had. It was sweet and moist, with the jalapeno flavor and spice entering at the very end. Mixed with that sweet honey butter, I could’ve eaten that the whole night and been happy. Of course I didn’t do that, but still.

To ensure a complete food induced coma on my 6AM flight the next morning, I went in on a basket of fried pickles finished with the “Big Tex” sandwich. The pickles, thinly sliced and beautifully fried, were like little crispy salt bombs with a touch of pepper.

The sandwich was a simple build with brisket, mustard, onions, and pickle. This really made the slow cooked flavors of Fox Bros’ smoke house come out with little prompting. The portion was generous (even within the context of my gluttonous order) especially since you get a side with it. I got a Frito Pie (because I didn’t indulge enough already). 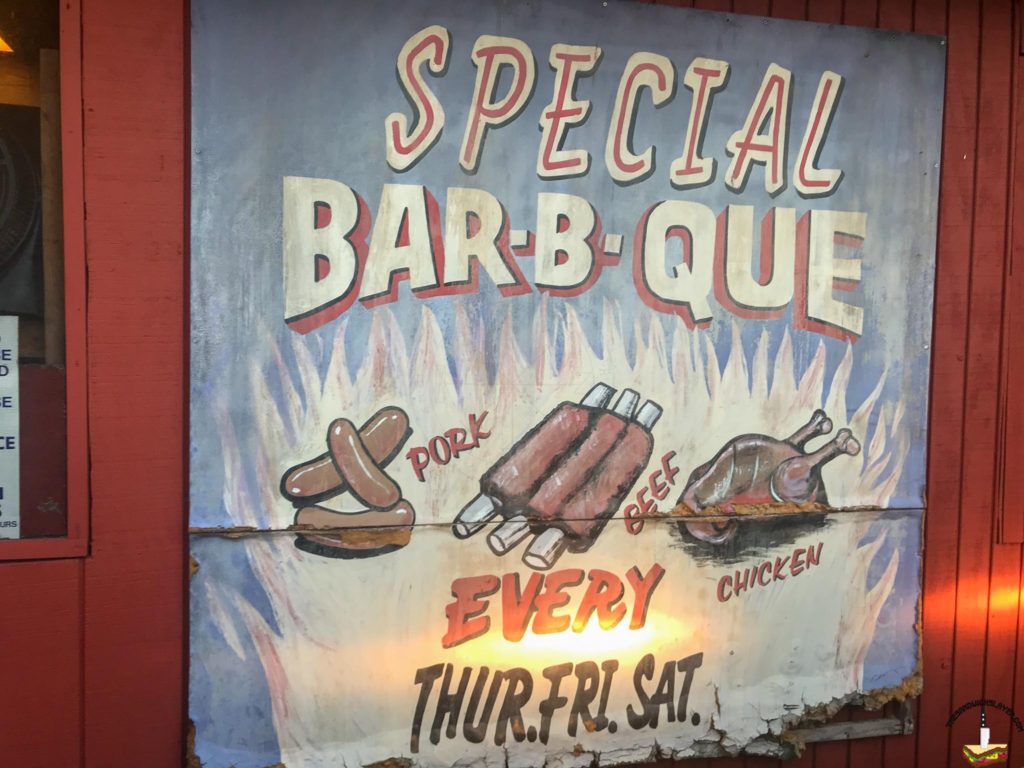 When I was approached with the possibility of going to Atlanta, there was a part of me that gave pause. I try to steer clear of politics on here (I don’t want to dirty the pristine idea of the sandwich with such sludge). If you’ve followed me on social media and other projects, you know where I stand on things.  Admittedly, there was a part of me that didn’t want to go to Georgia because of it’s politics. It is what it is.

After spending a day in Atlanta, my views on Georgia didn’t change (politically). But I somehow I conflated the politics if the state to it’s people, which is unfair to Georgians. There is a culture of amazing, empathetic people that shouldn’t be forgotten amidst all the gubernatorial BS. To all my friends in Atlanta, thank you for the hospitality and keep fighting the good fight.

By the way, I tried Waffle House for the first time. It still haunts my stomach.