The Sandwich that Started World War 1 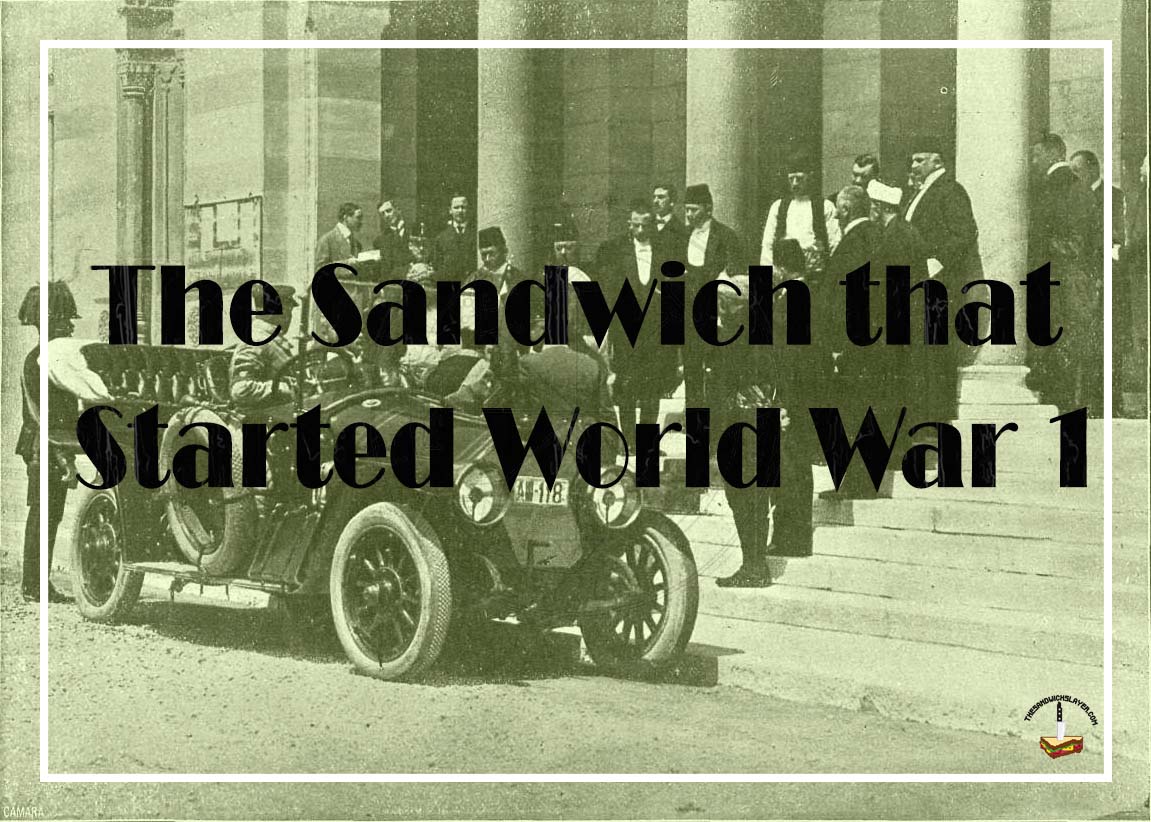 Did a sandwich start one of the greatest conflicts in modern history? no. But some believe that a sandwich was the reason behind the “spark” that lit the powder keg that was Europe in 1914. Yeah, a sandwich, that thing I write about on a weekly basis. How could something so objectively wonderful be responsible for the “War to end all Wars?” Let’s journey back 100 years ago and find out.

Europe Leading up to World War 1

We can’t move forward with the sandwich story without laying down some context; so here’s my C- 6th grade (at best) breakdown of Europe leading up to World War 1:

The dangerous political climate of Europe in the early 1900’s was due to a myriad of factors and unintended consequences. It’s a complicated web of shifting alliances that aren’t sandwich based(whether or not these countries decided to share preferred bread cutting methods or mustard/mayo ratios with one another is a mystery lost to the sands of time). Suffice it to say, a combination of resentment from past conflicts (look up Revanchism and the Balkan wars, etc) mixed with policy change and imperialism put the powers of Europe at odds with each other. Alliances and agreements between nations roped everyone into a precarious situation that was a powder keg ready to explode. It’s around this time (1908) that the nation of Bosnia and Herzegovina was formally annexed by the Austro-Hungarian Empire, adding to the seeds of resentment that would lead to that fateful day.

If you’ve taken a high school European history class, chances are you know who Archduke Franz Ferdinand is. For those of you who don’t, He was the heir presumptive to the crown of Austria-Hungary; meaning that he would take the crown from his uncle, Emperor Franz Joseph I once he passed. In 1914, The Archduke with his righteous dude mustache and wife (Duchess Sophie Chotek) traveled to Sarajevo, the Capital of Bosnia and Herzegovina. He was ordered by his uncle to observe military operations and various affairs of state.

Gavrilo Princip, the infamous assassin of the Archduke was a 19 year old Bosnian Serb who grew up on a farm in Northwestern Bosnia. Princip would eventually move to Sarajevo, where he attended school. Developing a sense of Serbian nationalism, Princip joined “Young Bosnia.” Much to my disappointment, Young Bosnia wasn’t a boy band with matching haircuts; But a group of students who advocated for Pan-Slavic ideologies. Working with the secret society known as the Black Hand, Young Bosnia set out to assassinate the Archduke while in Sarajevo.

On June 28, 1914 in Sarajevo the Archduke and his wife were touring around the city with a light security force and city officials. Princip, along with six other would-be assassins

The first assassin missed his chance at the motorcade, so it was on Nedeljko Čabrinović (I cut and pasted that name). He threw a bomb at the car, but it missed and injured the people behind the Archduke’s car. The added excitement of the attack caused the streets to become more chaotic and the motorcade to speed away. Čabrinović attempted suicide by ingesting a cyanide pill and jumping into the River Miljacka failed and he was taken into custody. This is where the sandwich comes into play.

Princip and the rest of the assassins scattered, expecting to regroup and plan another attempt. Dejected and hungry (my natural state), Princip headed to Moritz Schiller’s Deli for a sandwich. Ferdinand made his appointment at the town hall, where he zinged the mayor and gave a speech.

Observation: Who still goes and does his job after surviving a grenade attack? I barely went to work when I stubbed my toe. To be fair, anyone with a mustache like that has got to have testicular fortitude.

The Archduke was supposed to inspect the local garrison after the town hall, but plans changed. Ferdinand and his wife decided that they wanted to visit the injured in the hospital; Security decided on a new route, but didn’t inform the drivers of the change. As the cars went down the wrong side street, the Archduke’s chauffeur (Leopold Lojka) was told they are going the wrong way. The car was stalled in front of Schiller’s Deli as Lojka attempted to go back onto Appel Quay street.  Princip, fresh from a sandwich slaying, seized the opportunity and fired two shots, killing the Archduke and his wife before being apprehended. 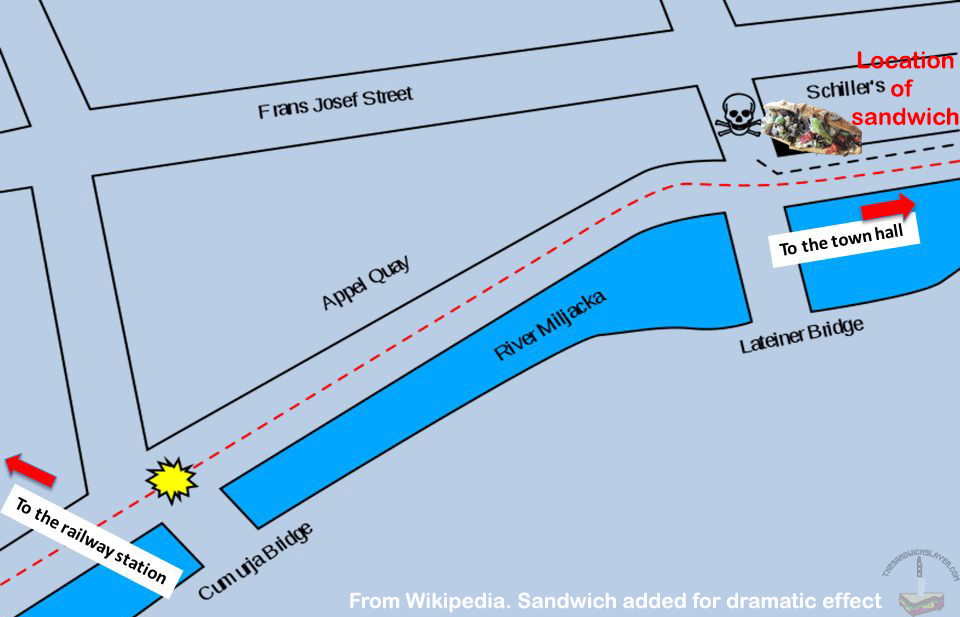 The reaction to the Archduke’s death would cause the powder keg to be lit; causing a chain reaction that would plunge the continent into war. A war which caused a level of devastation that most had not seen before. All because Princep decided to eat a sandwich…

Or so someone says. 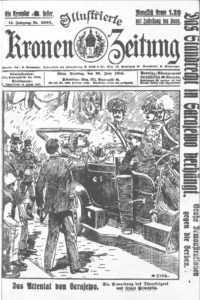 I heard this story a couple of years ago and just assumed it was an interesting little morsel of history. It’s a tale of how the smallest actions can create huge reverberations. It makes for one hell of a story (because murdering royalty in the middle of the street is boring apparently); But is it even remotely true?

The best source I could find was a Smithsonian article by Mike Dash where he talks about the sandwich story being a modern fabrication.

There’s plenty of things that debunk the Sandwich story, but I think the most compelling part is Dash’s tracing the origins of it all. After looking through court transcripts and other sources, the earliest mention of Princip with a sandwich is from a Brazilian novel called “Twelve fingers” by Jo Soares (2001). The story was likely disseminated by a British documentary called “Days that shook the World” in 2003.

So did a sandwich start World War 1? no. But I think the war was coming regardless of what delicious coincidences there could’ve been. After reading Mike Dash’s article and a post on reddit,I was a little disappointed; not because the story was false, but because I was so willing to believe that it was true. I’ve known about this story for years, but I never bothered to find out if it was true, I think I just wanted it to be true.

It really goes to show you how easily things can take a life of their own. This story is pretty harmless, but I think the lesson here (other than don’t go to work after some throws a bomb at you) is that info needs to be filtered. There are so many sources out there now that I think a lot of us are willing to believe our preconceived notions just out of laziness.