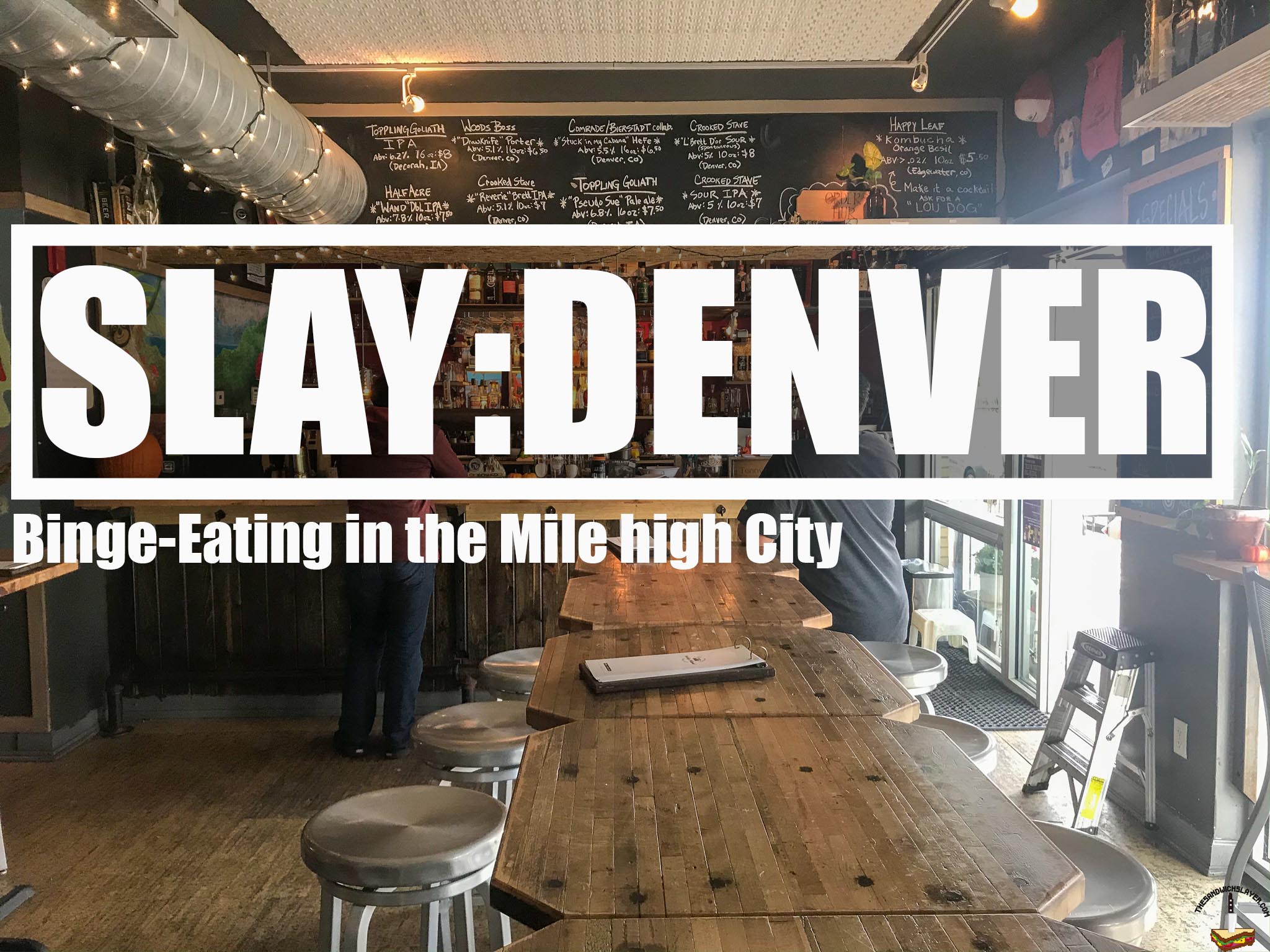 Colorado is a state that I’ve always wanted to visit. Mostly because I’ve watched the movie Dumb and Dumber every year since I was 6. I didn’t understand most of it until my 20’s, but 1990’s Jim Carey just gets me in the most obnoxious way. It took me 33 years, but I finally got to experience Denver Colorado two weekends in a row. Apparently I instinctively flocked there like the salmon of Capistrano. 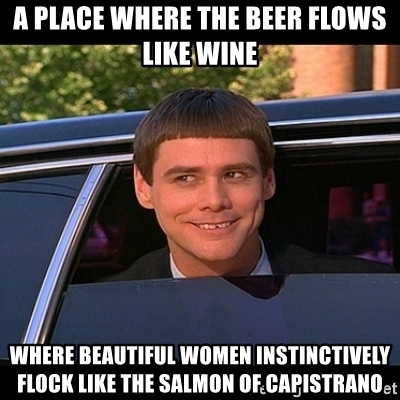 The first weekend was a bachelor party for my cousin Andrew, where we blew up our lungs in the altitude with archery dodgeball and forgot about our cardio problems at the Great American Beer Festival. A week later, I had the pleasure of attending the wedding of a very good friend and former colleague. Sometime between all the revelry, I had a chance to try some food Denver had to offer. It had it’s ups and downs, but the you really can’t beat the amazing backdrop of Colorado in the Fall. Here are the highlights in the mile high city:

A Southern style start in Denver 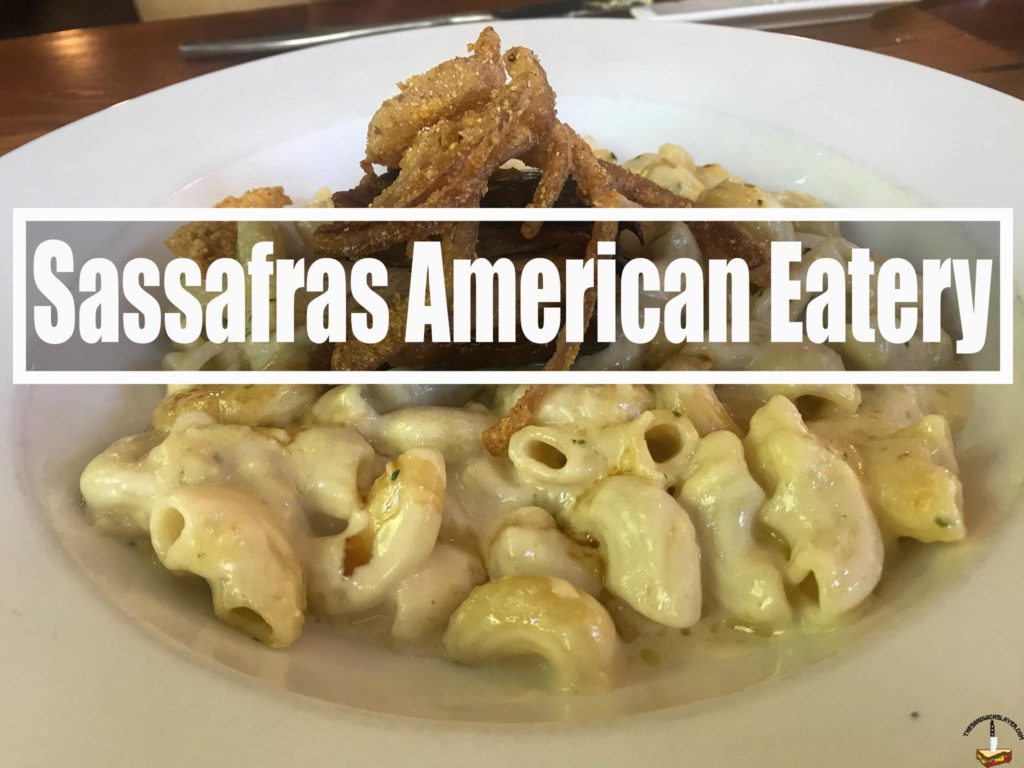 In my experience, upscale Southern cuisine can be hit or miss. Sometimes the down home classics of a hearty Southern meal becomes too elevated for it’s own good, forgetting the roots in which it came. Sassafras tows that fine line. Normally, I’d feature one or two items from the menu because my bank account would scream at me if i ordered more, but luckily I was with a bunch of other guys, and we all freakin’ love food. My favorite dish at Sassafras was the Cajun Benedict:

I’m not a big breakfast food guy, but I do make a few exceptions. Eggs benedict is one of those beautiful exceptions and Sassafras has given it some spice. With the amount of seafood and fried goodness on here, I don’t know if it can be considered breakfast anymore. Either way, Poseidon’s gonna be pissed when he finds out how many of his creatures we ate that morning. If you’re not a fan of the ocean creatures, check out the chicken fried eggs with bison hash. 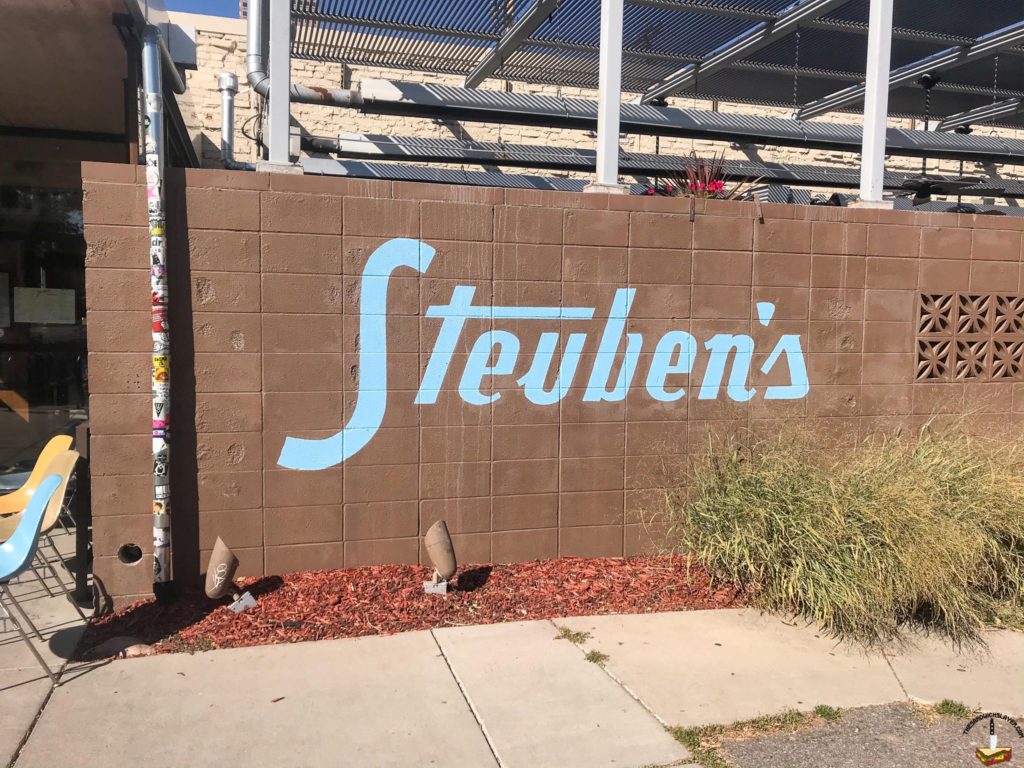 I went to Stueben’s on 4 hours of sleep before my first flight home. A long weekend of gluttonous debauchery with my cousins rendered me a bit lethargic. The restaurant has got a retro style with a pretty modern menu. It took a moment to shake the cobwebs, but the food woke me up quickly. The best part of the meal was the start, a strong infusion of crispy batter and salty brine. Of course I’m talking about fried pickles. 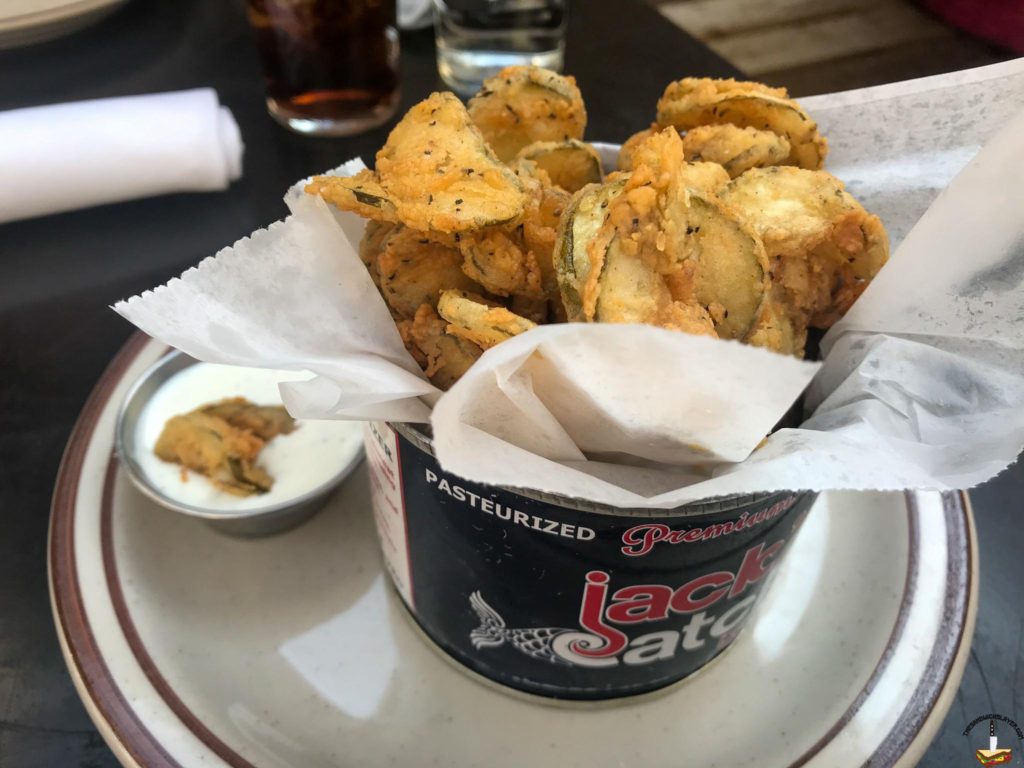 Fried pickles may not seem very special to most people, but you’d be surprised how quickly they get eaten. I don’t know if it was my need for salt or Steuben’s delicious batter, but I went to town on these guys. Everything else at Steuben’s is competently done and the portions are strong, consider them when you’re looking for some comfort classics. 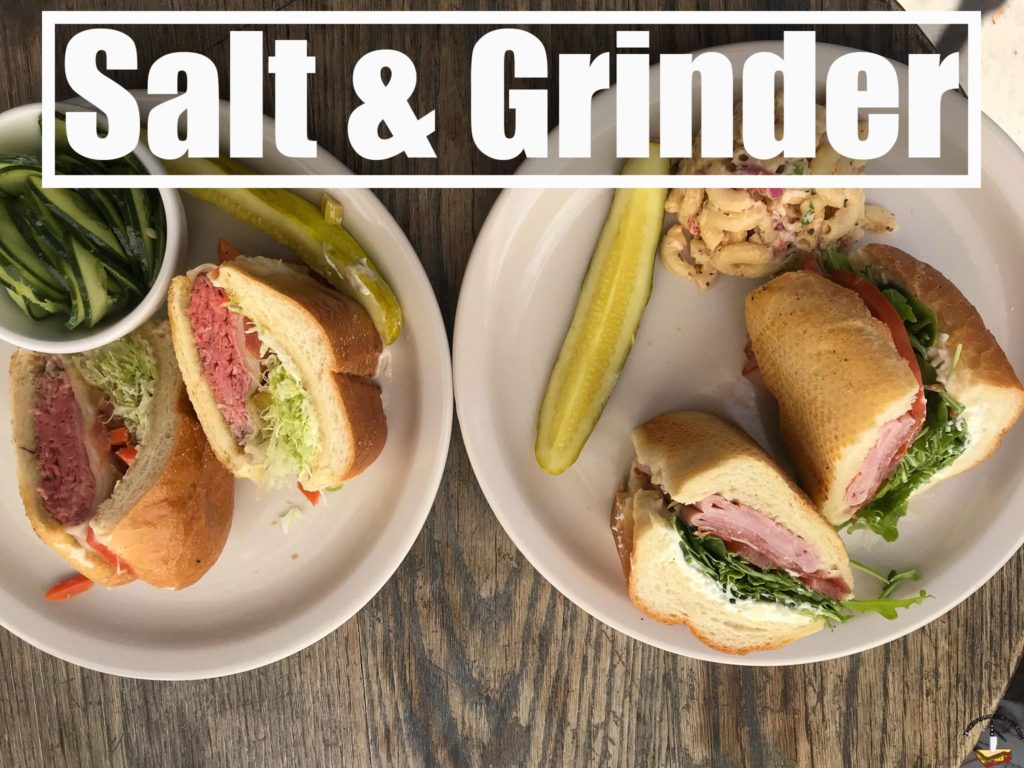 Sometime between the shenanigans of the Great American Beer Festival and the wedding, I had to find a good sandwich place to eat. Denver has several notable spots, but I ultimately decided to try Salt & Grinder. The menu isn’t overly clever but they do the basics pretty damn well. Because I was on vacation (and away from judging eyes), I decided to order two sandwiches. The one suggested to me by the guy behind the counter was The Frankie, and Italian sandwich with a side of macaroni salad:

As far as “Italian” sandwiches go, I liked it’s balance. So often when you order an “Italian” sub, you get a salt laden sandwich swimming in too much oil and vinegar. The Frankie was clean and concise in it’s flavors, with the burrata cheese making a big presence. It’s delicate balance reminded me a little of another burrata based restaurant that I just reviewed, which is a good thing. Of the two sandwiches tried, The Frankie came in second to the Italian Beef:

Let me start by saying that despite the name, this is nothing like the famous Chicago style Italian Beef sandwich that I know. With that being said, Salt & Grinder’s Italian Beef sandwich has enough to stand on it’s own. The star of the show is the rare garlic herb roasted beef, a testament to the power of house roasted/sliced meats. The subtle flavors of the beef hold up everything else in the sandwich, while the texture creates an amazing finish. That touch of spice from the giardiniera adds a nice spicy touch too. Both sandwiches were served on a lightly toasted grinder roll, a slightly thick and crispy crusted white bread, perfect. 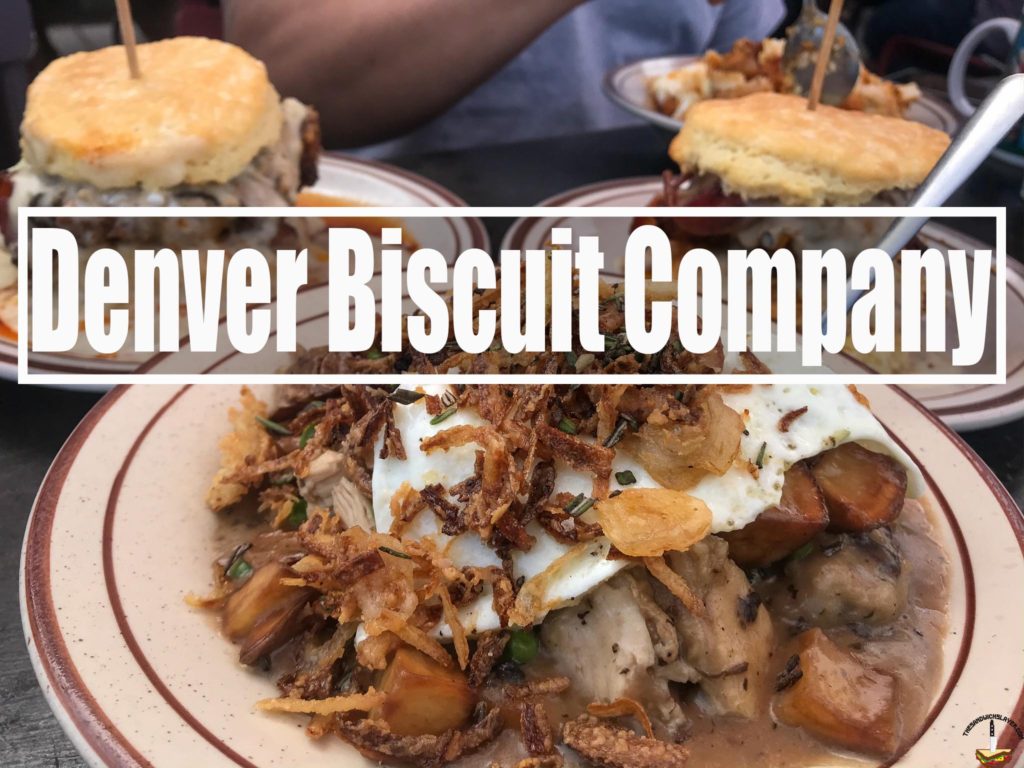 I would be lying if I told you that everything that I ate in Denver was worthy of writing. Truth be told, there was a mixed bag of food spots that I thought were notable (for better or for worse). My favorite meal whilst in the Mile High City was at Denver Biscuit Company, a Southern Style biscuit restaurant chain that quickly captured my heart. The temperature outside was too cold for my California sensibilities, but the wait here was pretty long and it was all they had. Luckily for me, the hot biscuits and gravy warmed me up fast. Don’t sleep on their bloody mary and house brined pickles, they’re both worth your consideration.

The sexiest hot chicken sandwich I’ve ever had 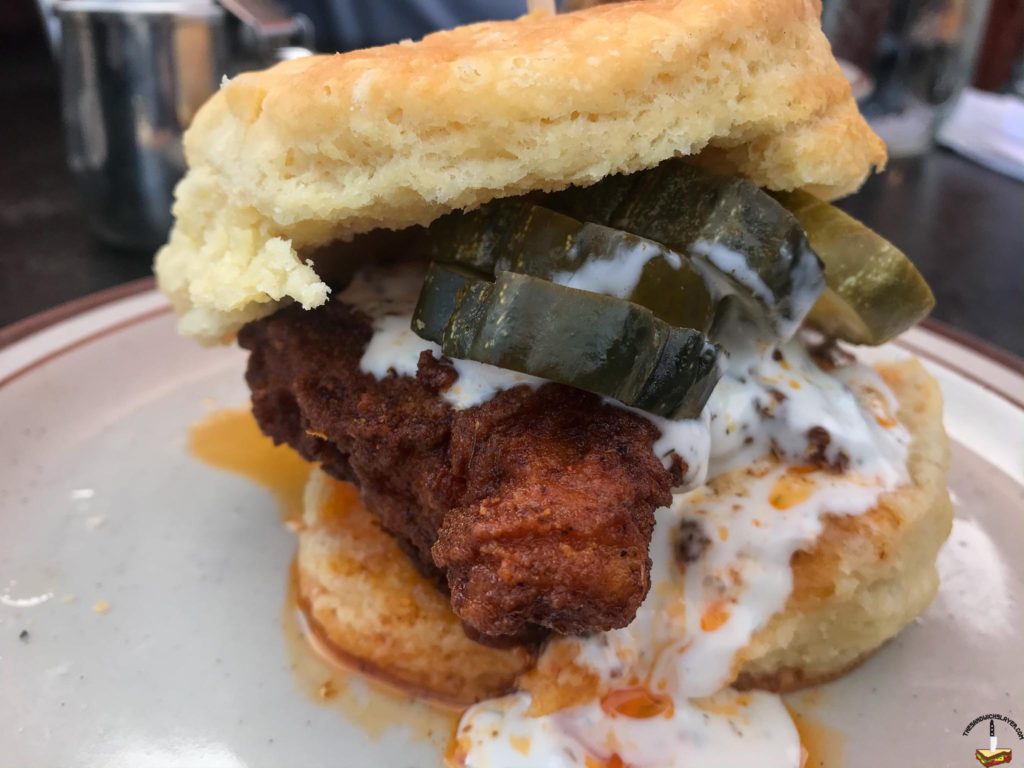 I’ve never been to Nashville, so I don’t have much of a standard as to how a hot chicken sandwich should taste. Of the hot chicken sandwiches I’ve had, the Beeler is hands down the best I’ve tasted. The hot sauce was smokey and spicy while the batter remained crispy. The ranch dressing cooled the heat down amazingly well while those house made pickles brought everything together. If that wasn’t enough, the excess sauce was soaked into the biscuit. Few brunches in my life have been this amazing. Of the dishes I tried, this was my favorite, but far from the only good thing here. I could eat their biscuit pot pie any time of day as well.

Denver Biscuit Company is connected to several other restaurants, one being Fat Sully’s; a New York style pizza spot. If you’re into super big slices, check them out too, it’s pretty good.

All in all, my time in Denver Colorado was a resounding success. Most of the food was good, the people were nice and the weather was brisk enough to keep things interesting in my Romper. Yeah, I wore a romper at the Great American Beer Festival and truth be told… I didn’t hate it. More importantly, I want to send my love and congratulations to my friend Dan Kim for getting married to the love of his life and to my cousin Andrew who will soon be married. Both of you guys did pretty damn well for yourselves and I’m happy to be a part of it.

Also, congratulations to Kimling and Jacob for moving to Denver! Apparently everyone in my life is going to Colorado. 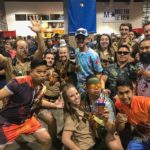