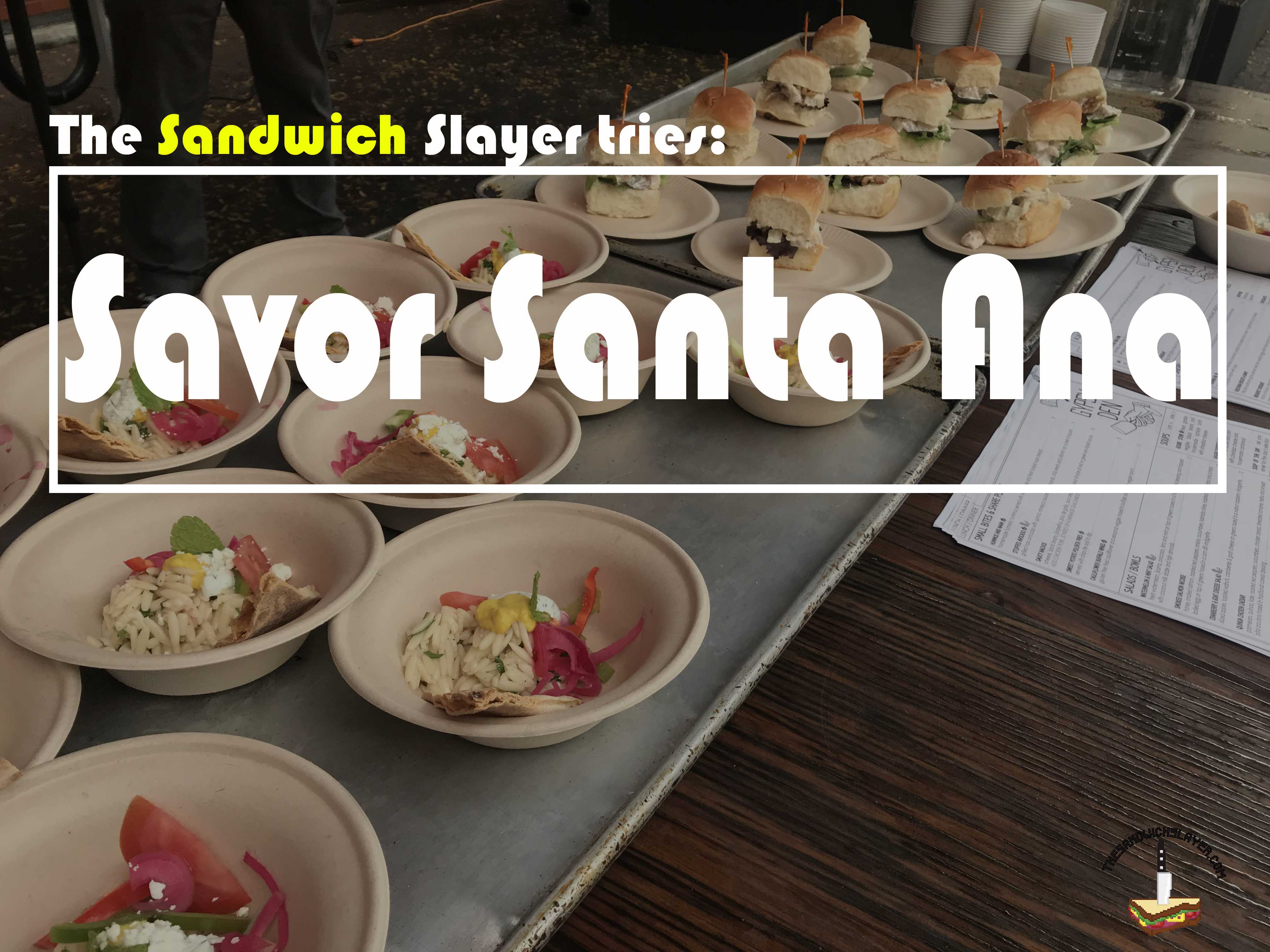 Santa Ana, like other cities in North Orange County, is quickly becoming a hub for foodies and connoisseurs of craft drinks. I got invited to try Savor Santa Ana, a food event that involves some of DTSA’s most popular restaurants offering small samples in exchange for tickets. A pack of 5 tasting tickets costs $10 and can be used in over 40 restaurants downtown. This is a good way for people to get to know restaurants that they didn’t know existed or never bothered to try, without risking the cost of a full meal.

Viva La Vida, a celebration of Dias De los Muertos was also happening on 4th street concurrently. I originally thought that it was a part of Savor, but it wasn’t. Either way, it was a hell of a Saturday in Santa Ana.

I started and ended my night at the 4th market. It’s the biggest concentration of restaurants participating in Savor Santa Ana and close to one of their two ticket booths. It’s also busiest spot during the event, so expect a little but of waiting. I started my night with Supernatural Sandwiches, a seafood themed sandwich shop that I first tried on my way home from San Diego Comic Con. 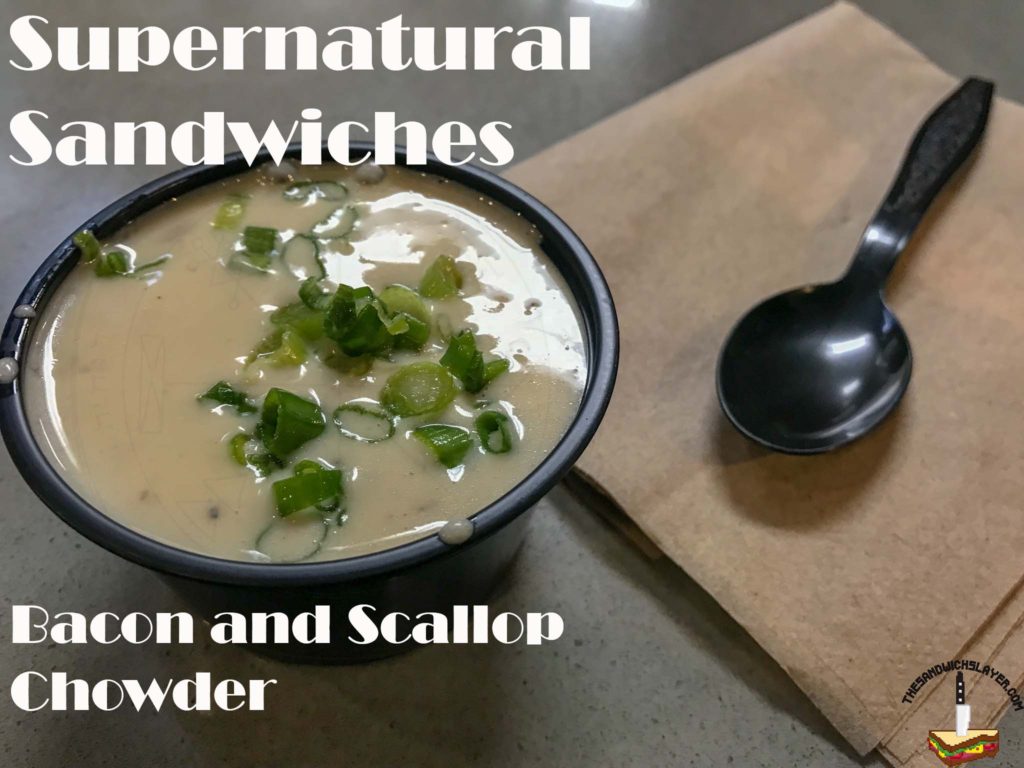 Chowders have always been my favorite type of soup, they’re filling and perfect for those rare cold California nights. Supernatural Sandwiches’ Bacon and Scallop chowder is a nice change from your standard clam and potato chowder and a great side dish to their seafood sandwiches. 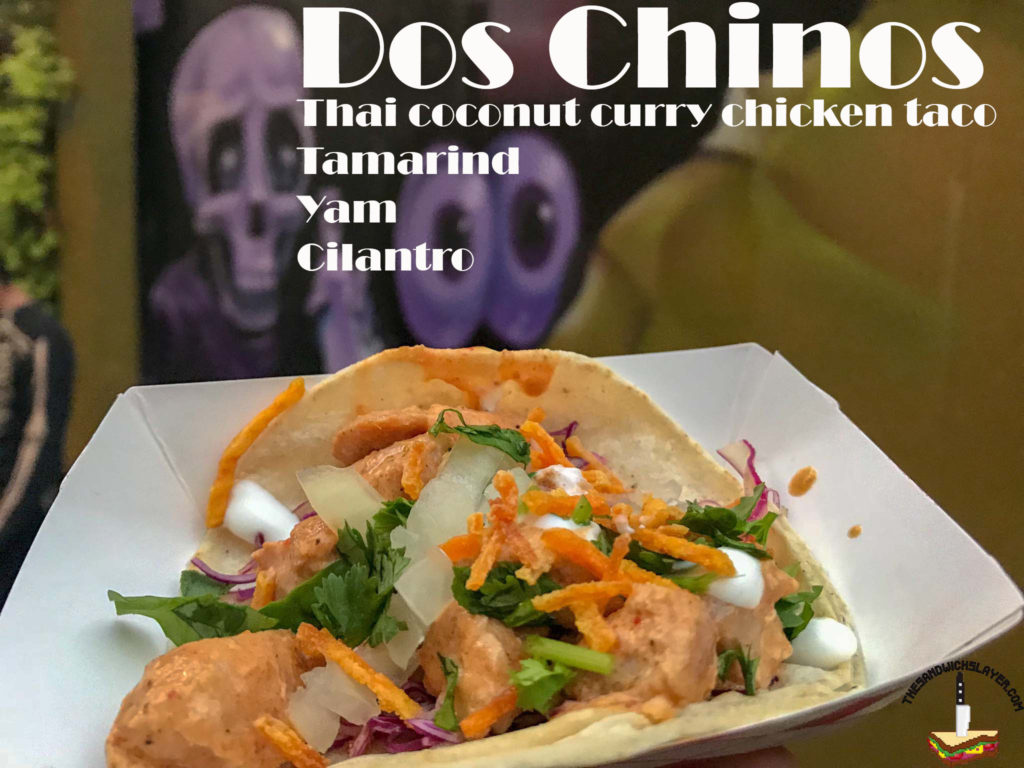 The fusion flavors of Dos Chinos has become quite popular in Orange County. While I have yet to try their regular menu, I am looking forward to it after eating their Thai coconut curry chicken taco. On first glance, I was worried that it would fall into the trap of being more gimmick than flavor. Dos Chinos’ taco was well executed, with an interesting spice palate. It was more muted than expected, but overall a nice contribution. 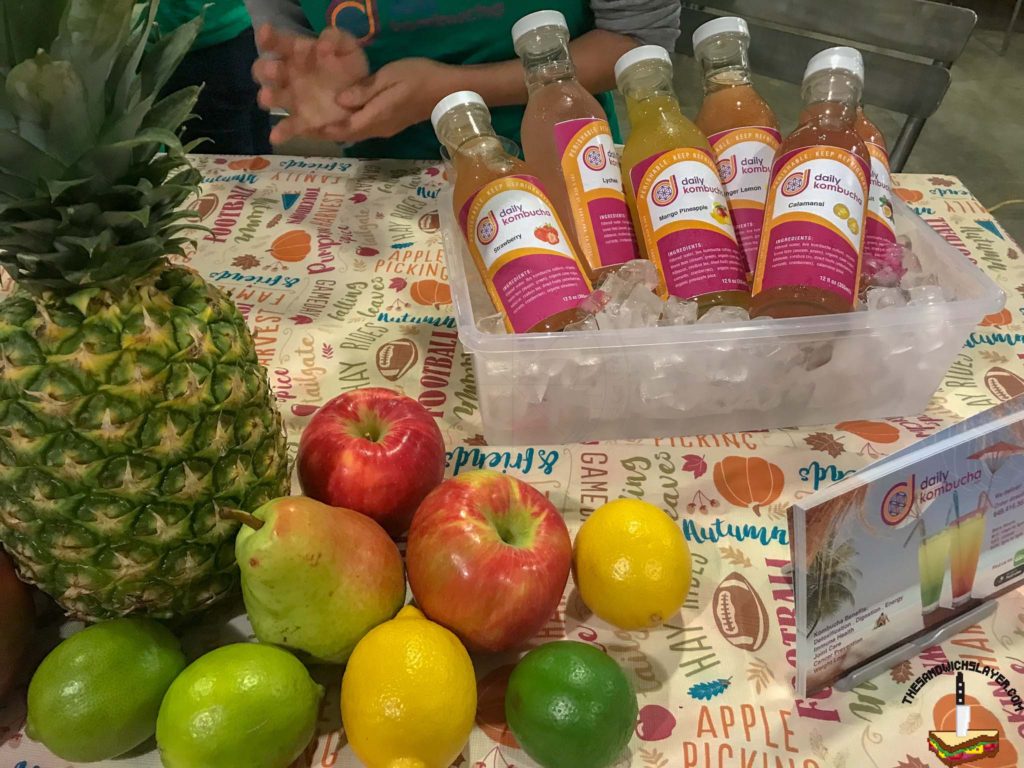 Somewhere along the side, Kombucha was being handed out for tickets. I’ve never understood Kombucha, and after trying it, I still don’t. 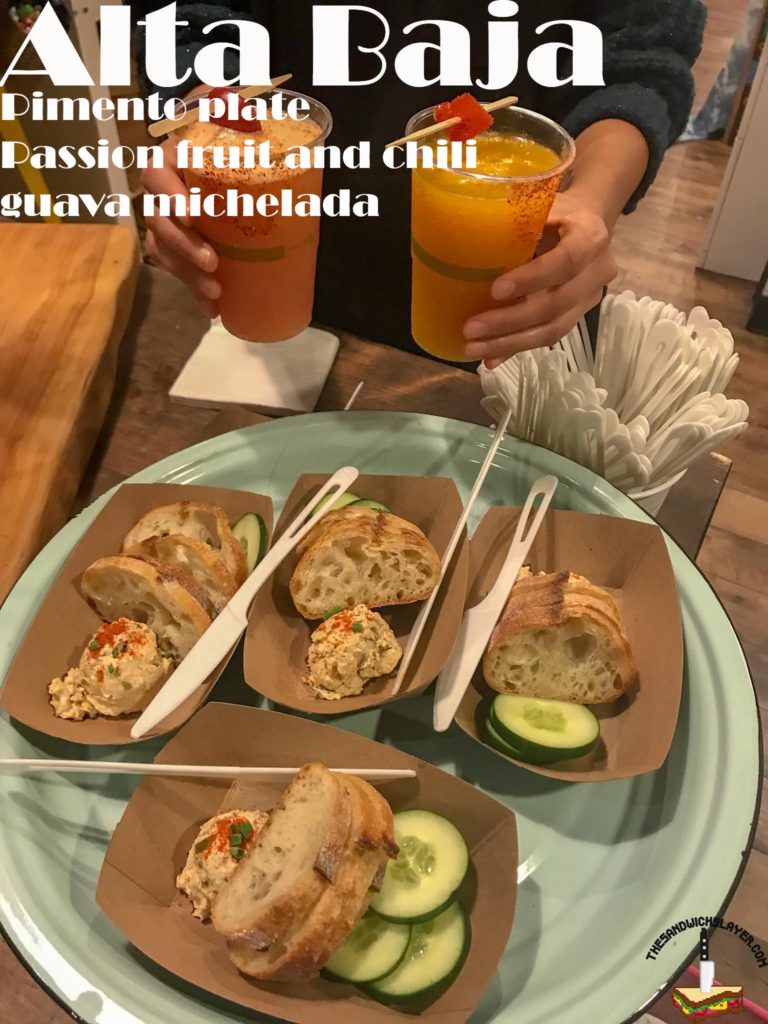 Alta Baja is a small market with a great selection of deli food and hot sauces. Their selection of Pimento cheese spread and Micheladas was perfect for anyone looking for something spicy. Also, they had a nice altar for some great names in food. This one hit me a bit. 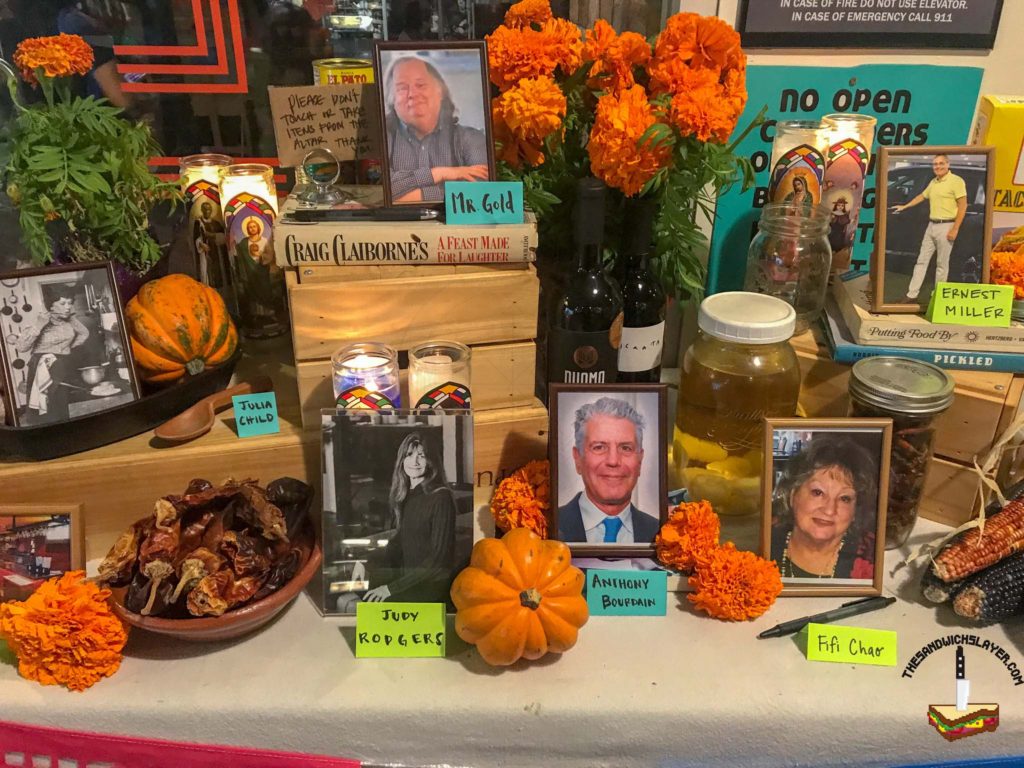 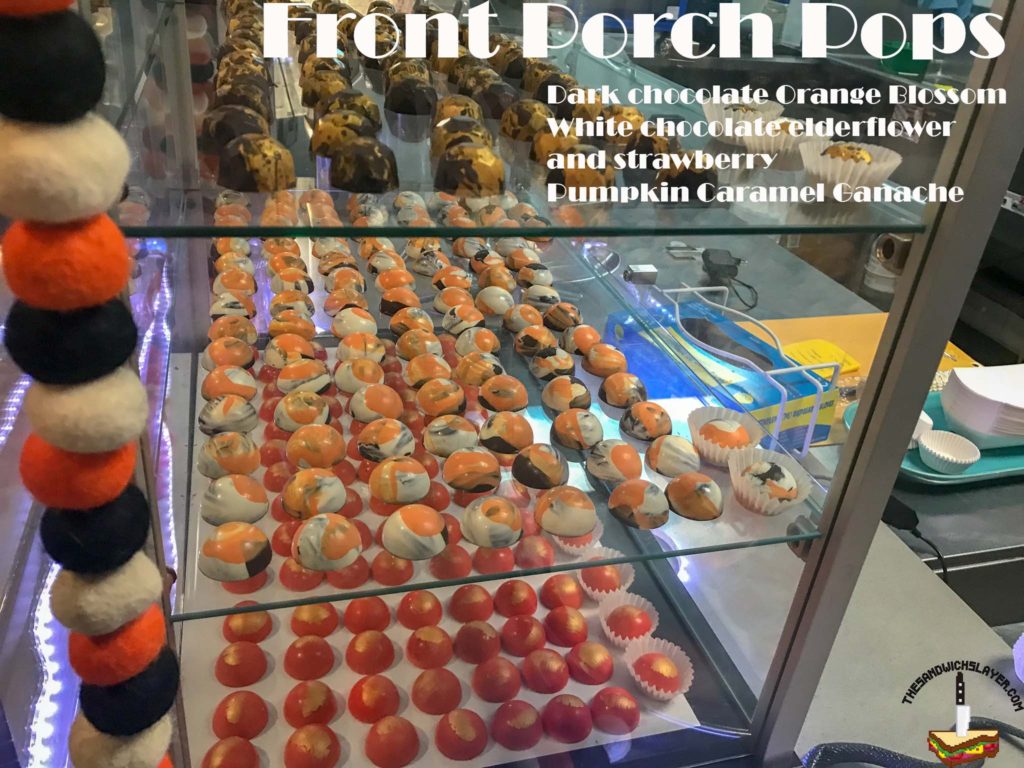 Front Porch Pops specializes in popsicles, but I had a chance to try their chocolate truffles. They were decadent and a great way to cleanse the palate for more gluttonous adventures.

Sometime between gorging myself and falling in love with family altars on 4th street, I got my face painted. So don’t get freaked out by how awesome I look in later photos. 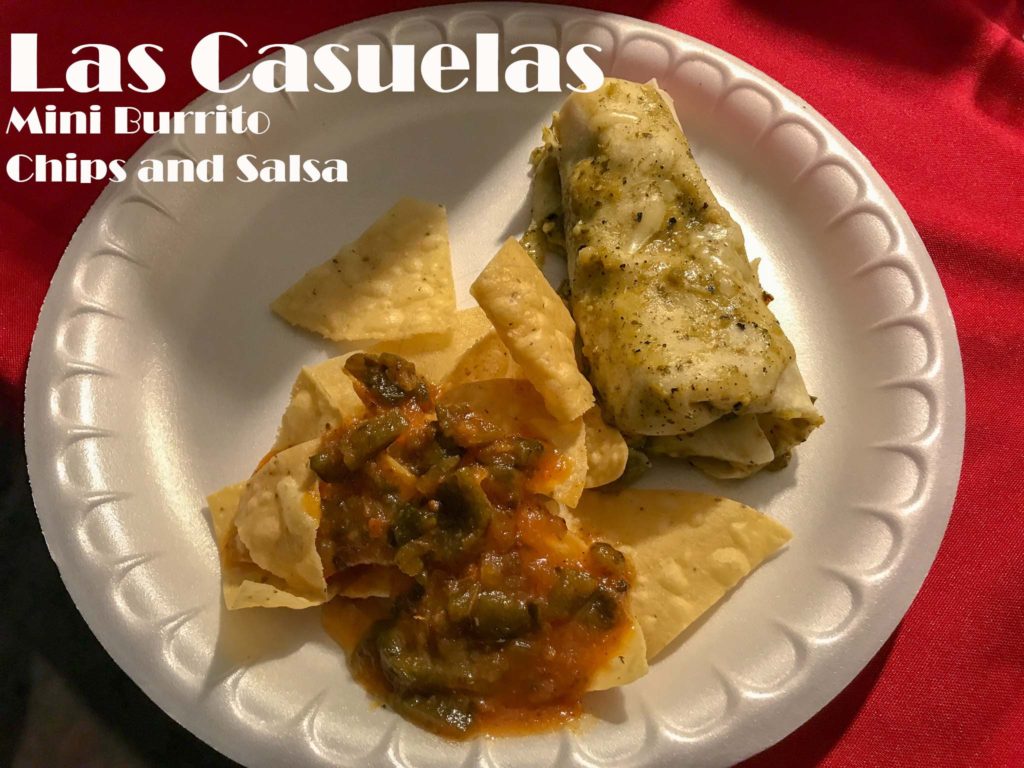 When it comes to portion size for a ticket, Las Casuelas won the night for me. They called it a “mini burrito”, but the size was pretty big for the cost of a tasting ticket. I think the protein was carnitas, with a lightly spiced green sauce. I thoroughly enjoyed it! 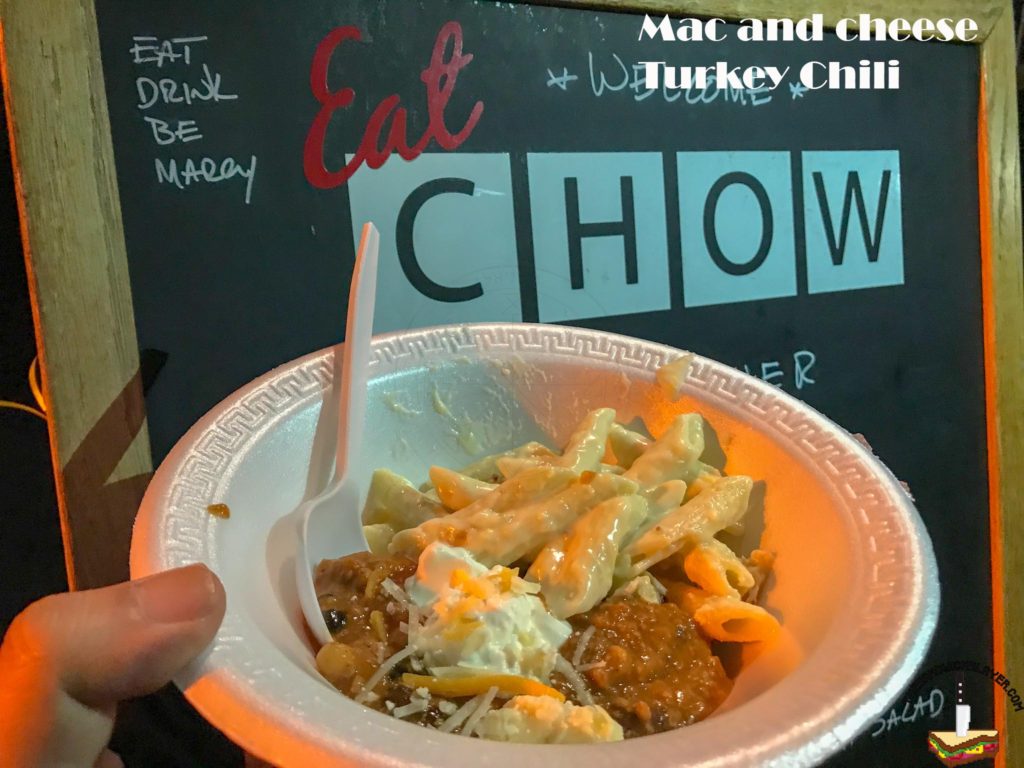 Eat Chow has been on my list of places to try for awhile now, this was a nice introduction. Their portions were pretty good too. We had a choice between a thick and creamy mac and cheese or a house made turkey chili. I opted for a combination of the two and enjoy both.

Artist’s Village is a couple blocks down from 4th street market and is also close to opposite ticket booth. It’s courtyard and fountain make for one hell of a spot to people watch if you have a free evening. There is a lot less going on here than on 4th street, but later on in the evening the bars begin to come alive. Once Savor Santa Ana was over, the after parties began here. 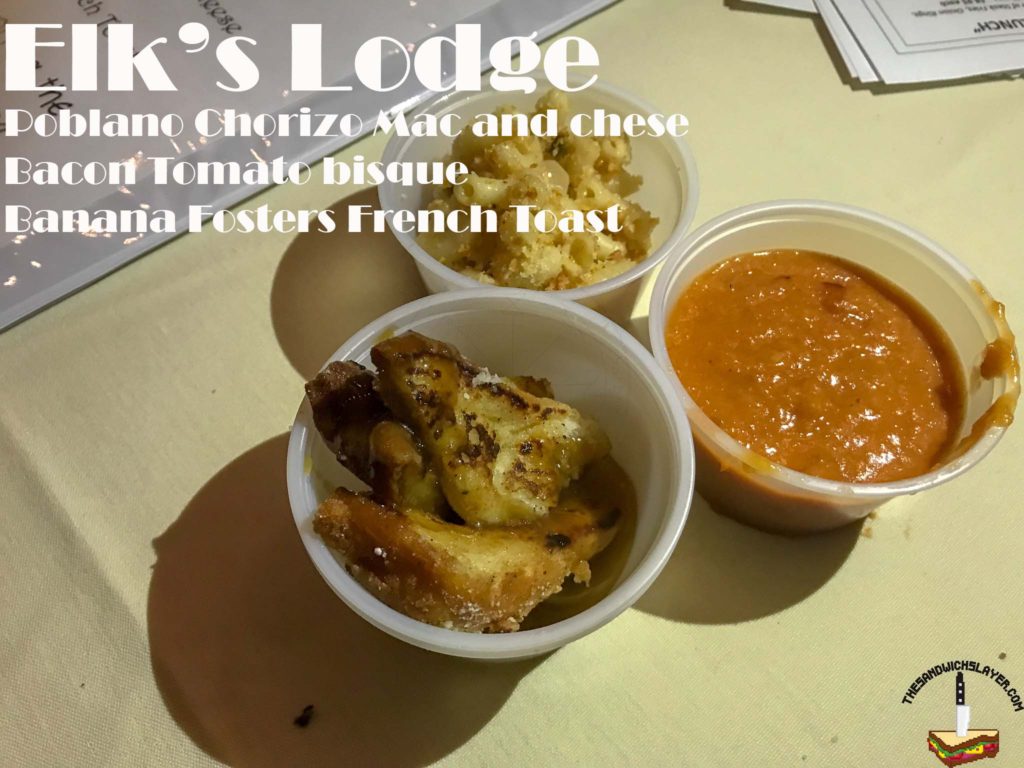 Hidden in a alley in Artist’s Village is the fraternal organization known as the Elk’s Lodge. While you normally need membership to enter and participate in the lodge, they graciously opened their doors to Savor Santa Ana. I thought the poblano chorizo mac and cheese would be more savory, but it didn’t really stand up against their tomato bisque. The bananas foster french toast was excellent though, with a nice sweet crunch. 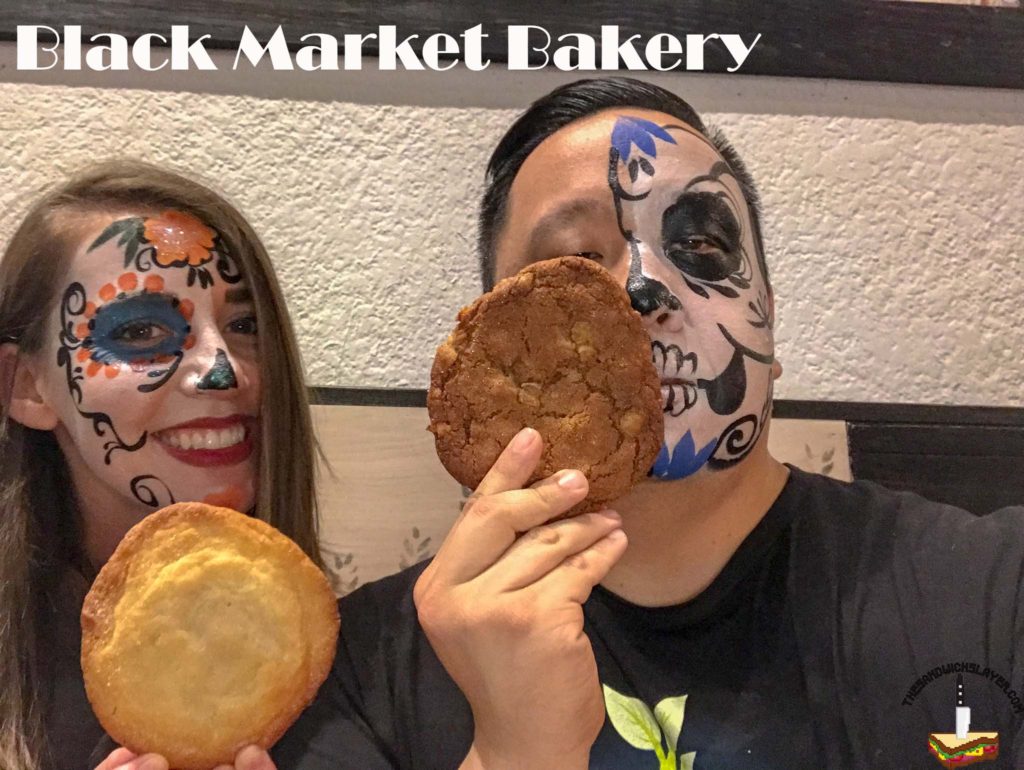 I think Black Market Bakery had featured other things for Savor, but they likely ran out. We didn’t get there till the end of the night, so we were scraping for whatever was left I think. Either way, the cookies that we got were great! especially the citrus sugar cookie. Shout out to my Skeletal partner for being such a good sport (and not getting jealous of how good I looked in face paint). 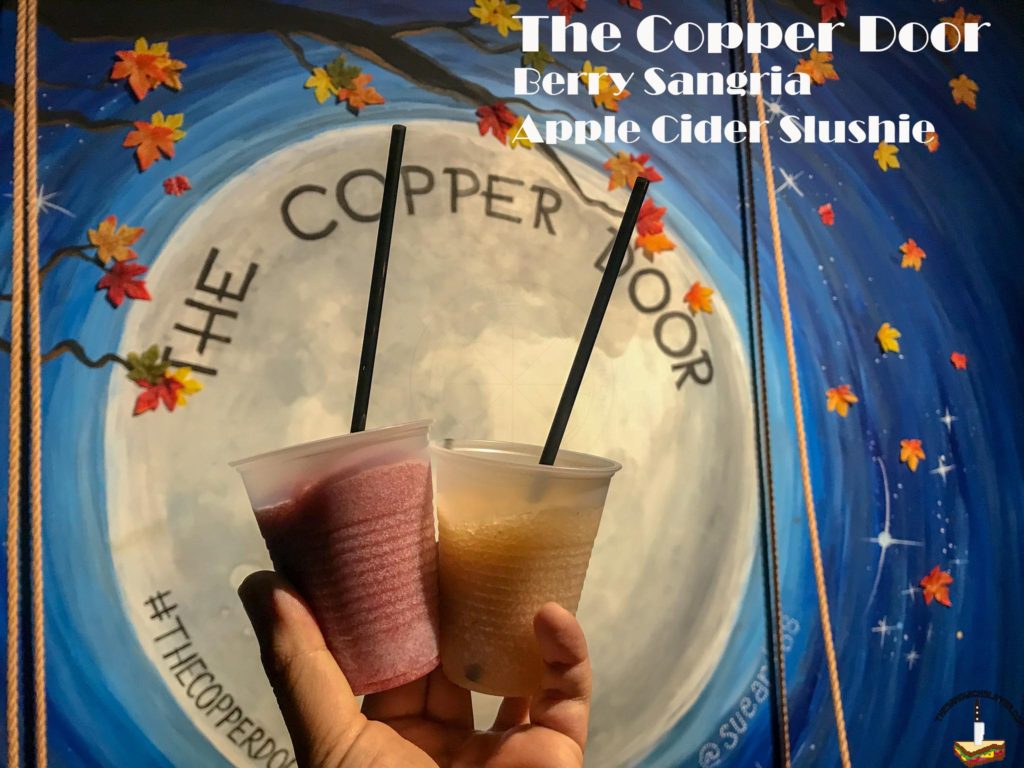 The night ended with a couple of frozen libations from The Copper Door. I’m not much of a drinker, so there hasn’t been much excuse for me to go in there. I’m happy that I did, because the Copper Door does have some charm. The painted walls add a nice touch.

I’ve had the pleasure of participating in several food festivals this past year and while Savor Santa Ana involves a little more walking, I think it’s a good way of introducing restaurants to the community. Night Markets are popular now, but you don’t really get to experience the atmosphere of a restaurant doing those. This offers a great opportunity to find a new place to congregate with friends.

Thank you again for the organizers for inviting me out! I look forward to going next year.