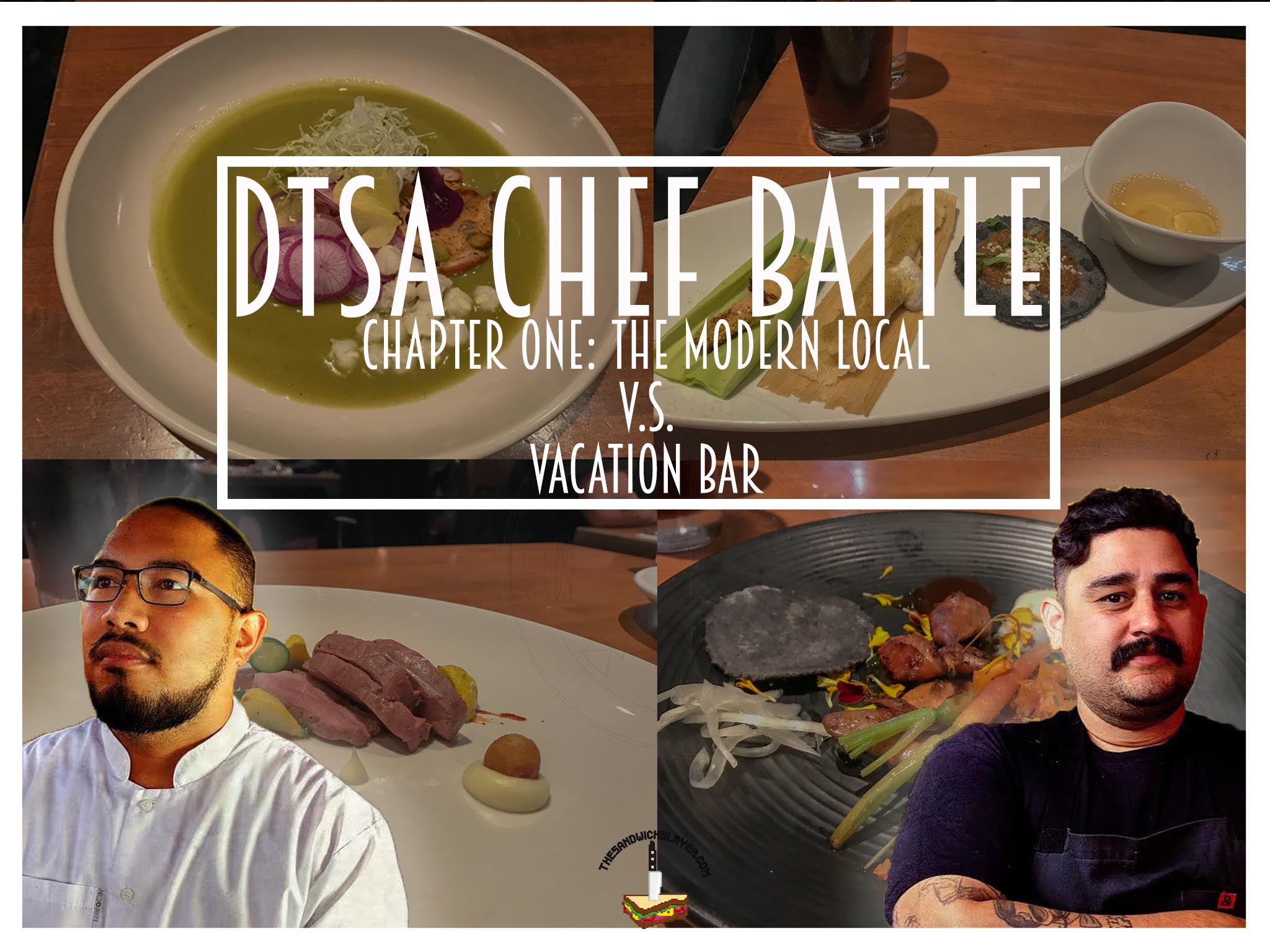 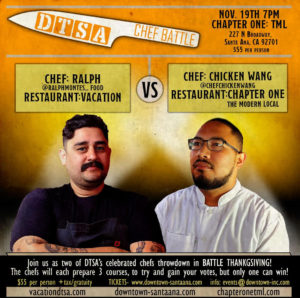 It was a hell of a week for your old pal Vy. I was invited to try out the first ever DTSA Chef battle: a six course competition between Chef Chicken Wang (not his real name, but I dig it) of Chapter One: The Modern Local and Chef Ralph Montes of Vacation Bar. The field of battle between these two culinary warriors was fought in the dining room of Chapter One, a dim and comfortable restaurant on the artist village of Downtown Santa Ana. Sat beside me at the judging table was OCFoodieGirl and 40 or so locals with armed with voting sheets and eager palates. Each judge’s vote counts as one, while the diners votes would ultimately decide the winner if there should be a tie. 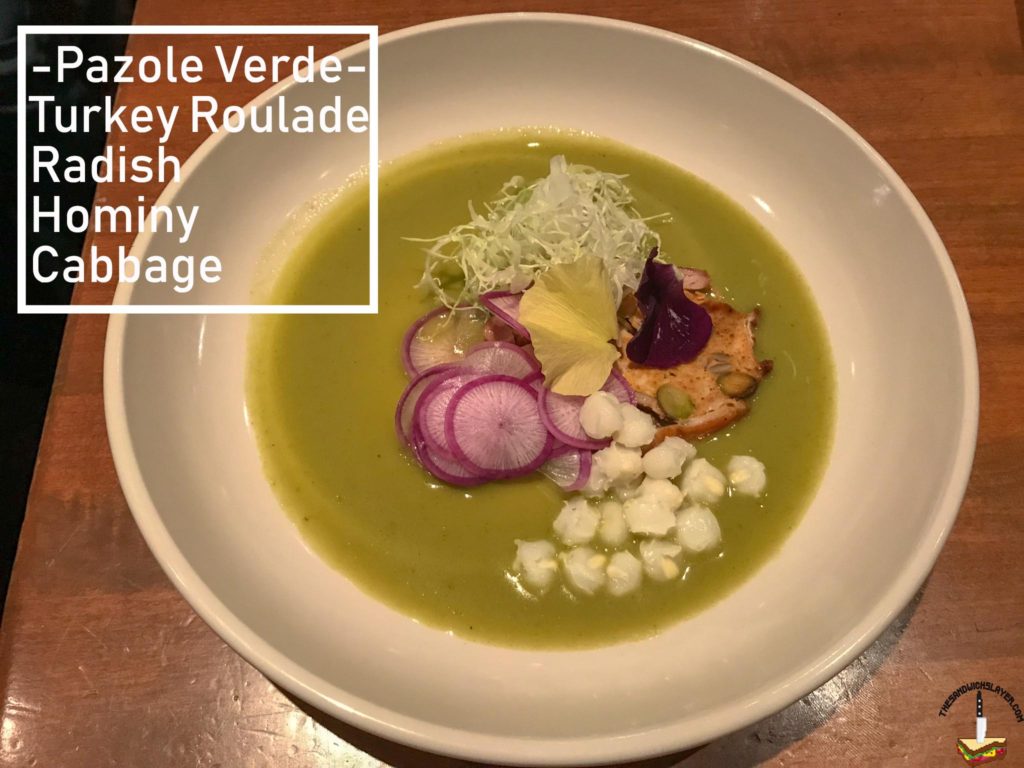 I’ve always considered Pazole to be a comfort food. A soothing soup that makes you feel better when you’re under the weather. A straightforward dish where you can identify every ingredient and take comfort in the familiarity of it. This Pazole brought more spice and texture than expected. The broth on it’s own was pretty spicy, but was beautifully cut by the turkey and radish. 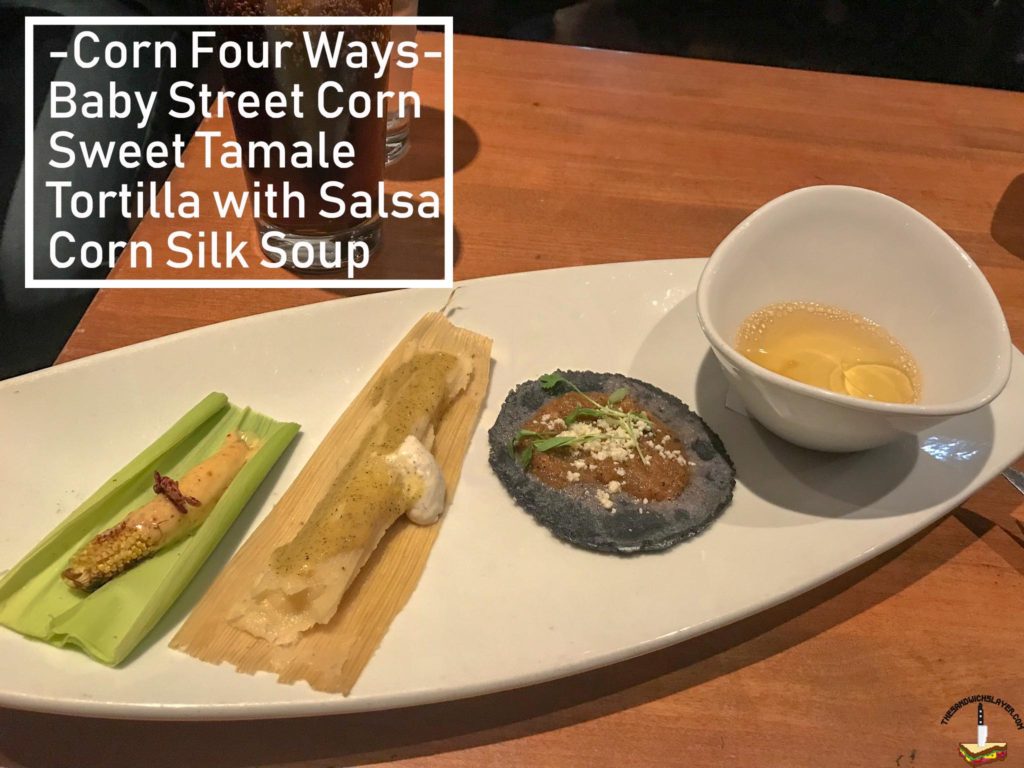 The voting sheet said corn prepared three ways, but it was actually prepared four ways. The corn silk soup was the fourth addition and it had some people confused. Because the sheet said corn prepared three ways, people didn’t know what to do with the broth at the end. Some were drinking it, some were dipping the rest of the appetizer in it, I did both. The original three items represented three distinct flavors: the baby corn was spicy and creamy, the tamale was sweet, and the hand made tortilla was smokey. The corn silk soup was very subtle and it was hard to pick up on the flavors after eating the rest of the appetizer. 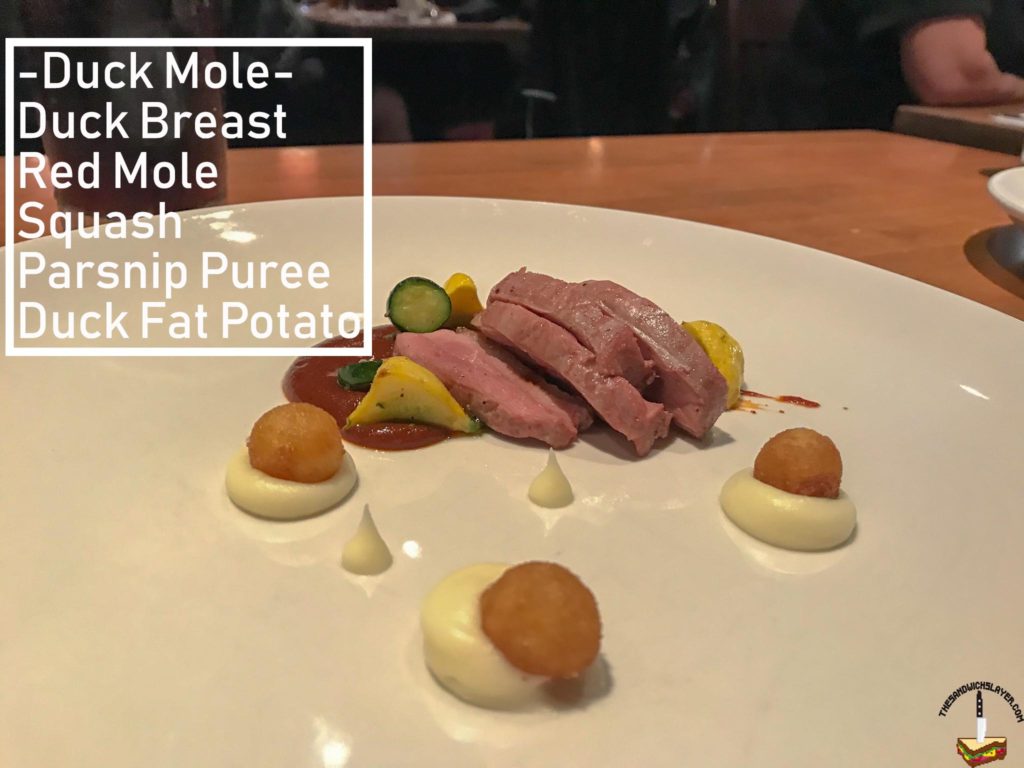 It’s been quite some time since I’ve eaten duck; this dish really brought back some good memories. The thoroughly enjoyed the balance of dark, fatty meat with the parsnip puree. The red mole was unlike any mole I’ve tried before, it almost had a South East Asian flavor to it. The duck fat potatoes add a little bit of weight to the composition and balanced the spiced mole quite nicely. 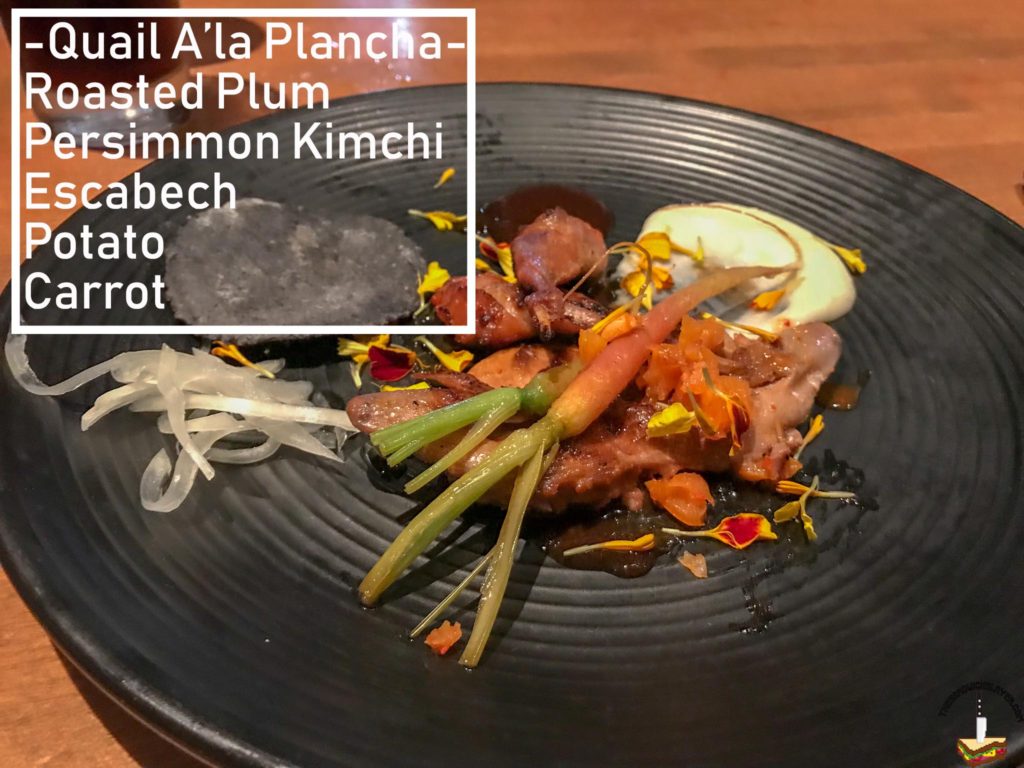 The first thing I thought about when I saw this dish was that it was ambitious. Whereas the duck’s plating was simple and the ingredients were easily identifiable, this one was bold and a little flashy. This is the first time I’ve tried quail and I enjoyed it; everything moved between sweet and pickled notes while the potato counter balanced it all. I particularly enjoyed the persimmon Kimchi. 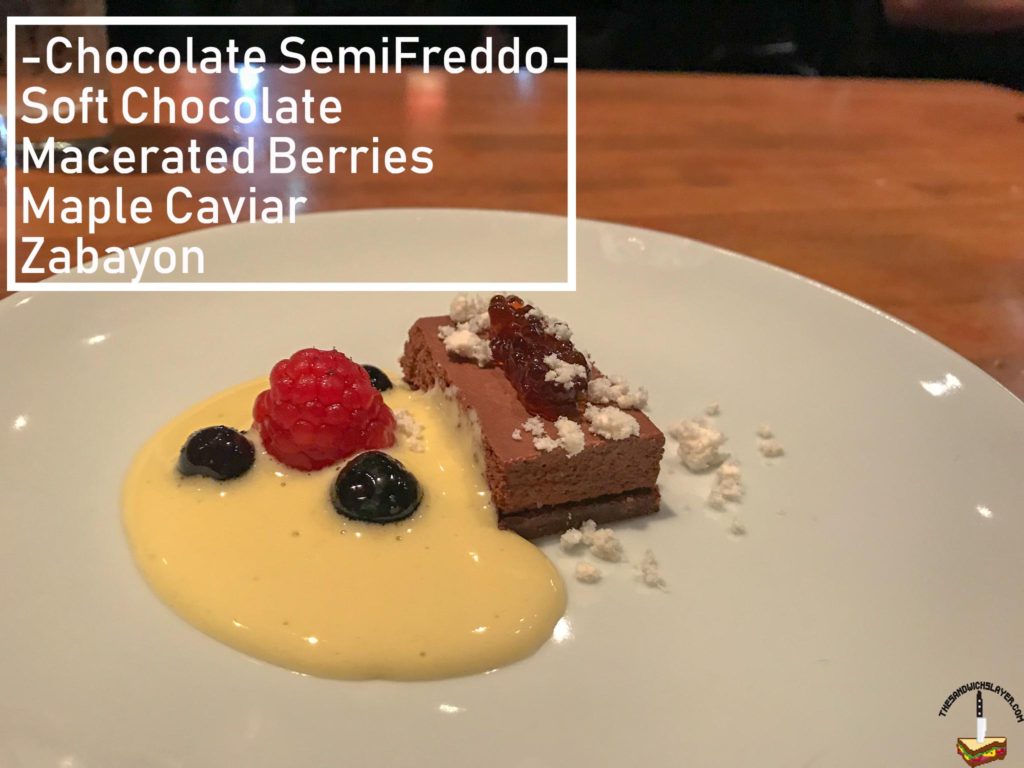 The Chocolate SemiFreddo was exactly as it should’ve been: rich and sumptuous with just a slight crunch. I found the macerated berries and creamy zabayon to be a nice respite from the rich chocolate. The maple caviar, was somewhat masked by the sweetness of the rest of the dessert, but on it’s own, it truly shined. 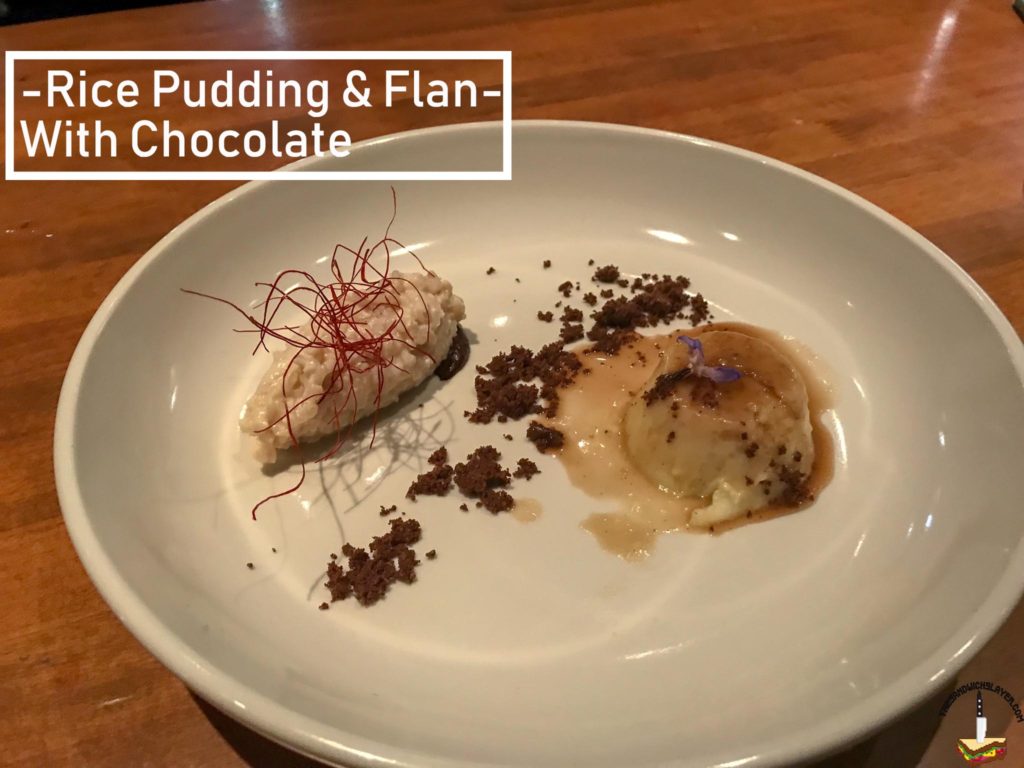 The Champion of DTSA Chef Battle

Everyone voted as the courses ended, OCFoodieGirl and I waited till the very end. It took some deliberation and a lot of internal conflict, but the votes finally got tallied. With Chef Wang won the 1st course with his Pazole and Chef Montes won the 3rd with his rice pudding and flan. The 2nd course was a tie between the judges, so it was on the diners to determine the champion.

So what dish won the first ever DTSA Chef Battle? Chef Montes’ Half Quail A’la Plancha. A worthy crown for any lord on the culinary battlefield.

Some time after tasting Chef Wang and Chef Montes’ food, I thought about why I voted the way that I did. Chef Wang’s menu, rooted in time tested flavors and combinations was made with a deft hand. There was cohesion and harmony within every ingredient in his food. Chef Montes’ food took more risks. It felt like he was trying to present some flavors that diners wouldn’t normally think of and toy with some expectations. His ingredients felt more individualistic, working more independently of one another, both to it’s advantage and detriment. Either way, both menus were excellent in their own right. 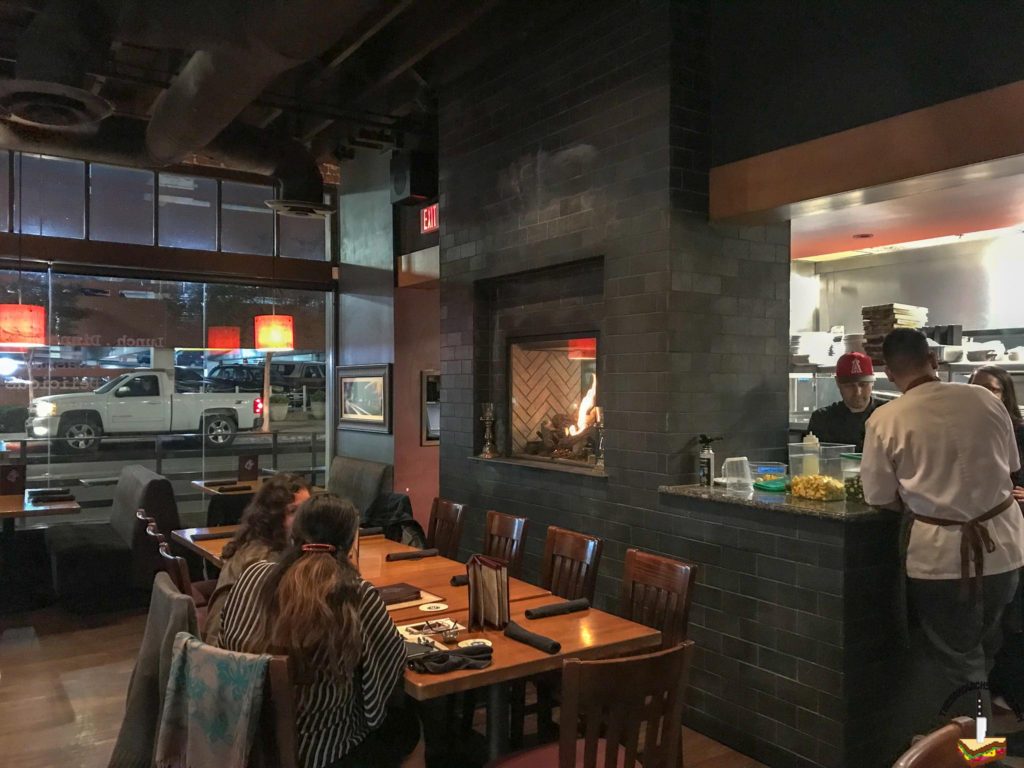 This was an amazing night of great food and great conversation with fellow food enthusiasts. Downtown Santa Ana is quickly becoming one of my favorite places in Orange County to dine. If you haven’t tried the food at Chapter One or Vacation Bar, I urge that you do, if these menus were any indication of the passion put into their menus, you’ll find something that you love.