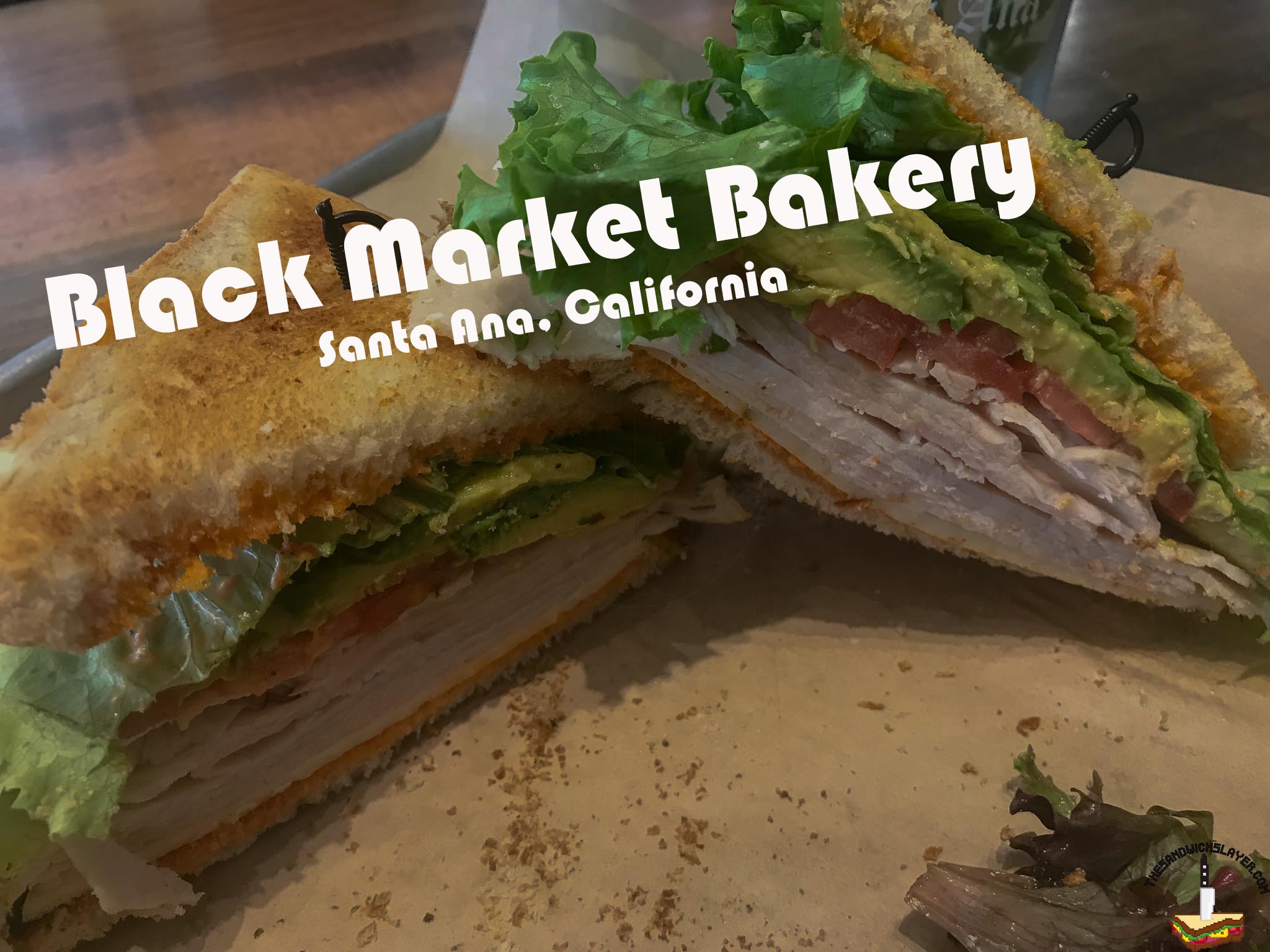 I look back on many of my posts and often wonder why I don’t review more bakeries. Bread plays such an important roll (LoL) in the construction of a good sandwich, you would think I’d seek out more places that make it. Well, like most things in my life; mistakes have been made and I’m trying to rectify them. Black Market Bakery in Santa Ana is where I begin my new “Pro-Bakery” lifestyle. 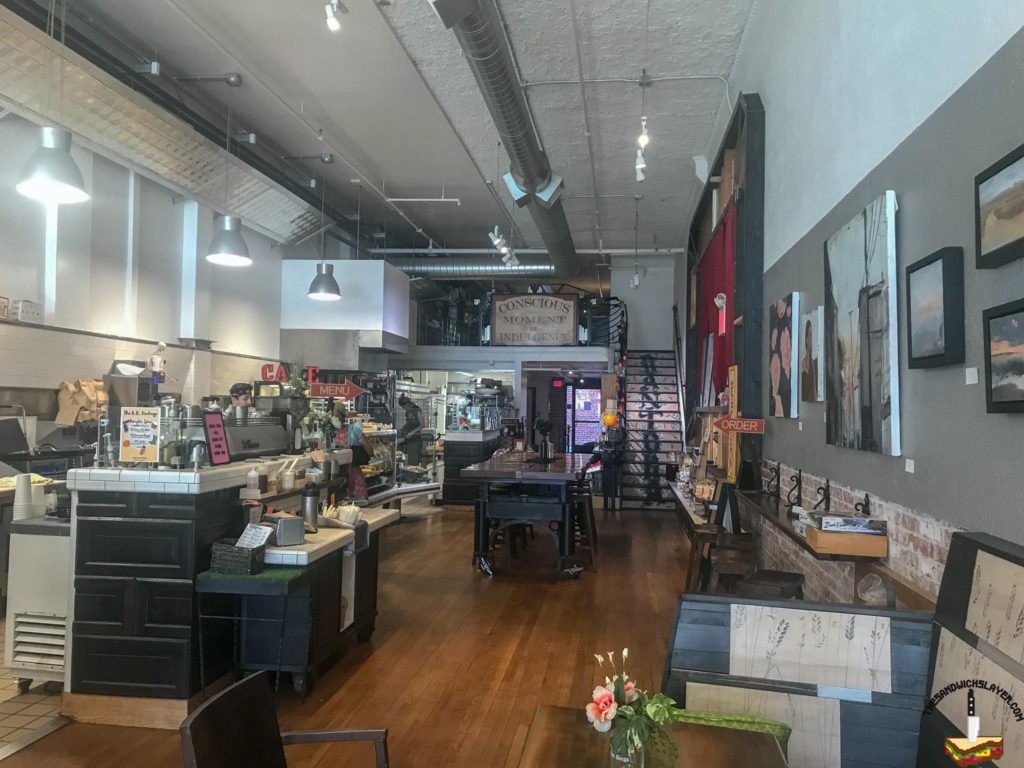 They have several locations across Southern California, all which bake several different things. If I remember correctly, the Santa Ana location bakes their sweets, but their breads are made in Long Beach. I wasn’t actually aware of these locations until recently.

If you haven’t already figured it out, I really like Dutch Crunch bread. Black Market Bakery makes and sells loaves of said bread, although it is served sliced on the their sandwiches. That means that you don’t get a lot of the crunchy baked rice paste along the top like you would a roll, but it’s still damn good. Regardless of it’s lack of a crunchy top, the bread is nicely toasted and a perfect texture for this sandwich. 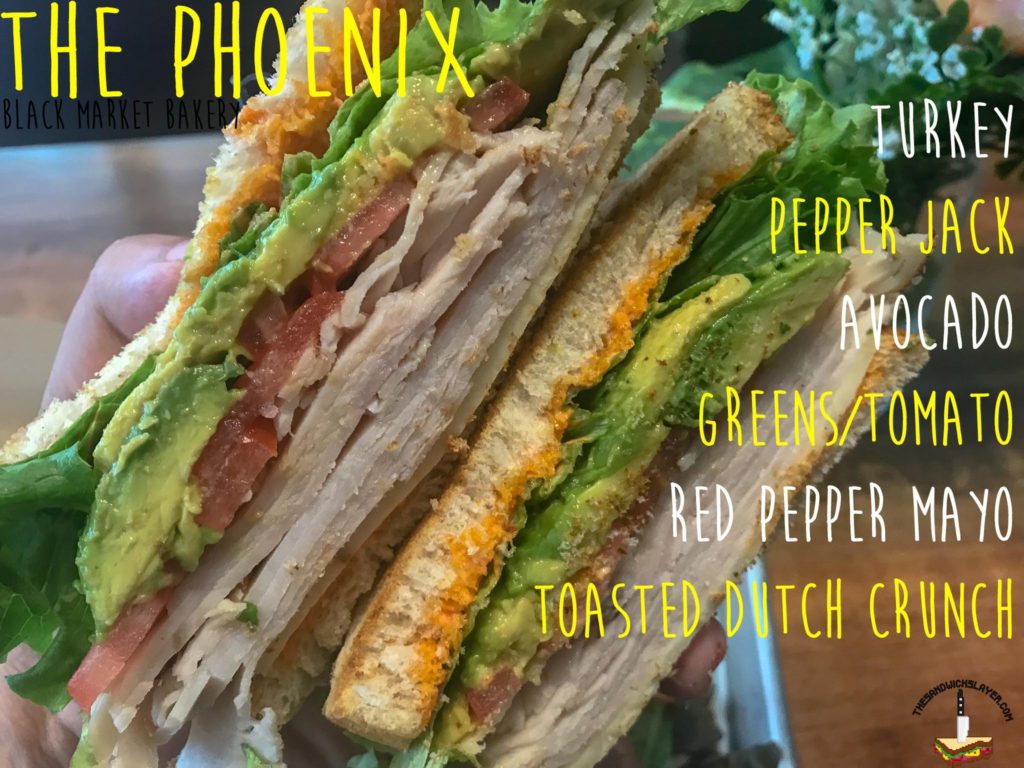 On paper, the filling of the phoenix seems pretty mundane, but what it lacks in excitement it makes up for in flavor. A sandwich like this may seems simple, but it really highlights the quality of it’s parts; so sometimes something like this is harder to execute. The crispiness of the toasted bread was perfect with the creamy avocado and the turkey had a nice flavor. Nothing in this sandwich was wasted flavor or texture, everything played a part that contributed to the sandwich overall.

The things that differentiate the Phoenix from standard turkey sandwiches the the red pepper mayo. When I ordered it, I assume that it would taste like the run-of-the-mill chipotle/pepper mayo, but there was more to it than expected. Light touches of spice mixed with red bell pepper added another level of flavor to the mild turkey. Combined with the pepper jack cheese, it gave some character to a solid turkey sandwich.

The Sandwich was $9.25 and came with a side salad and pickle. With a drink you may end up paying about $12 – $13 for a good lunch. It runs about the same price as equivalent restaurants in the area. There’s also a draft selection for anyone looking to get a little warmed up on something cold.

Black Market Bakery has all the trappings of a good coffee shop/bakery. The menu items are pretty straight forward with some nice little tweaks and the setting is comfortable enough. It’s a nice spot to go for anyone looking to grab some coffee, a light lunch, and maybe write in their ridiculous sandwich blog.