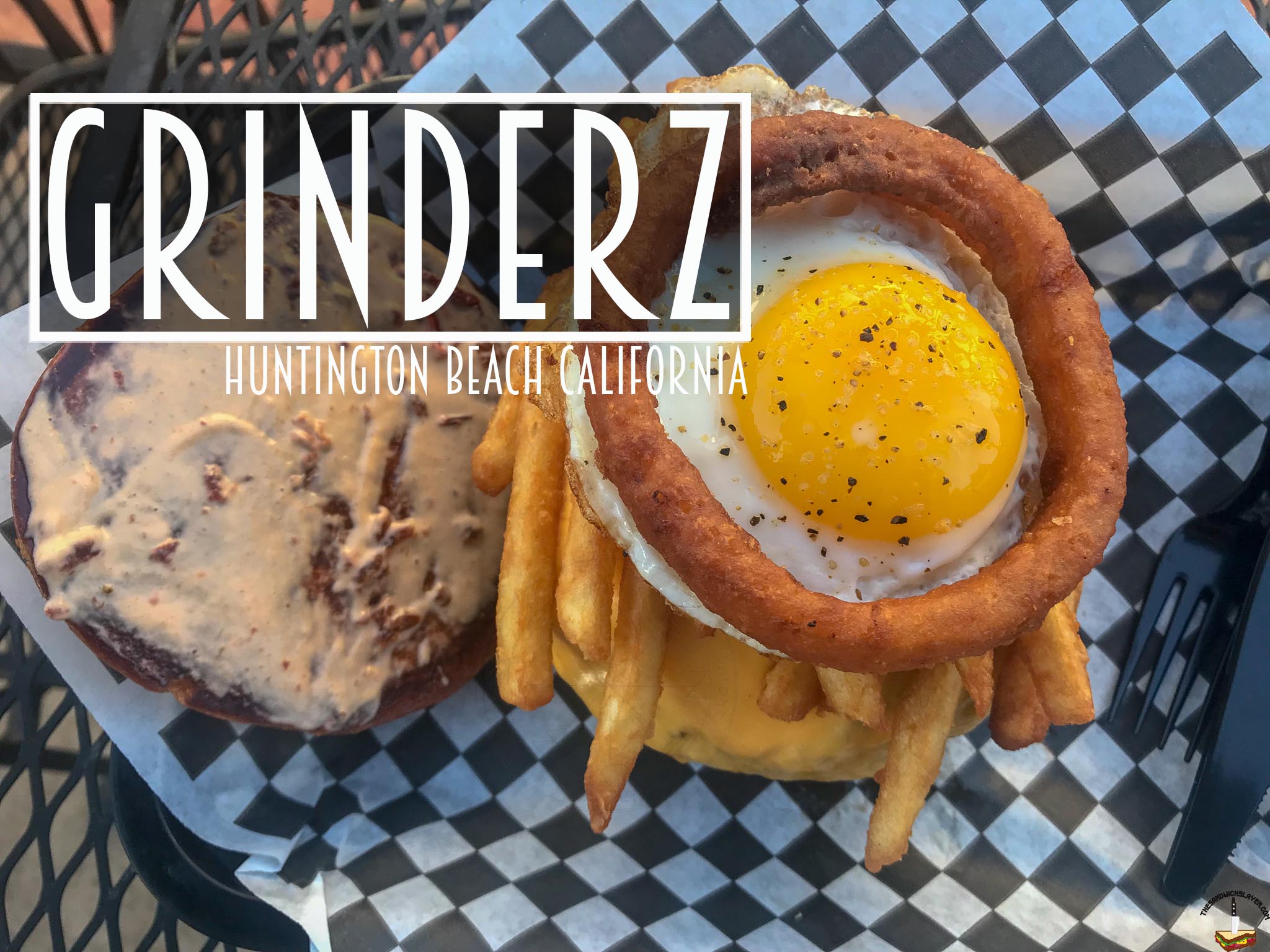 When I first learned of Grinderz in Huntington Beach, I thought that it was a sandwich place. I mean, a grinder is a type of sandwich isn’t it? Apparently it’s also a dating app for people with much funner lives than me, but that’s neither here nor there. Once again I was wrong, but in my incompetence I stumbled onto a beautifully gluttonous burger spot in an oddly picturesque setting. Before we move forward I need to confess that I forgot to look up the name of the burger, somehow I managed to remember the names of burgers that I DIDN’T order. 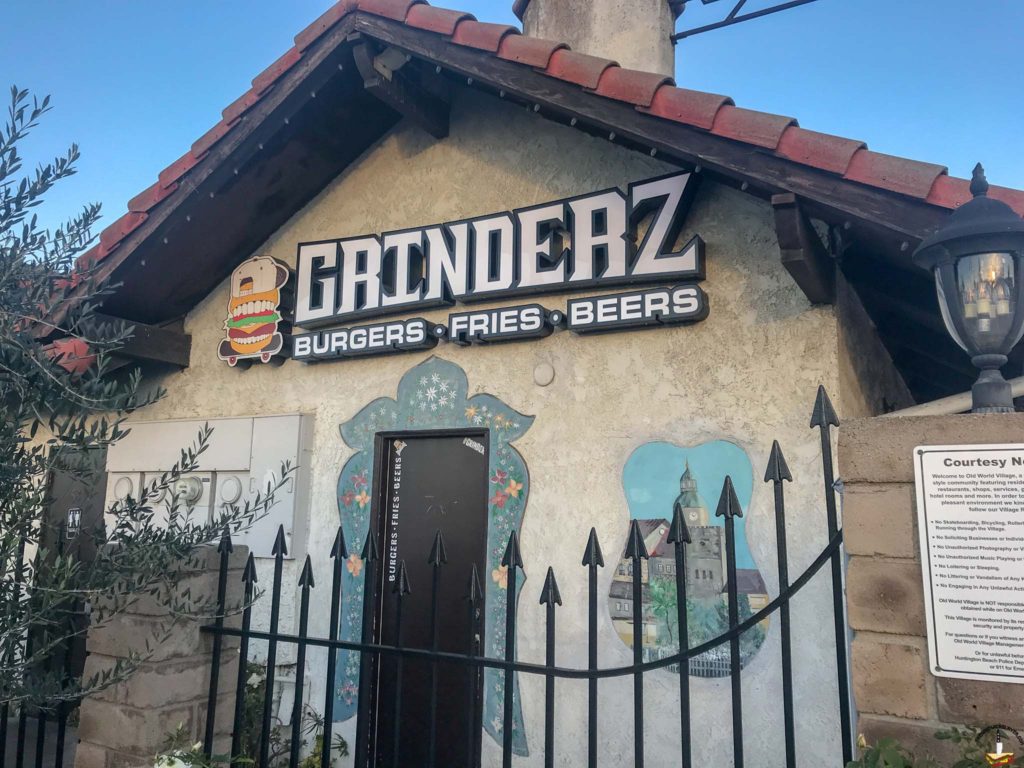 How the hell did a skater inspired burger place end up in a European themed shopping center? that’s a question for people more intelligent than me, I’m just here to stuff my face. Which is something Grinderz has a knack for. 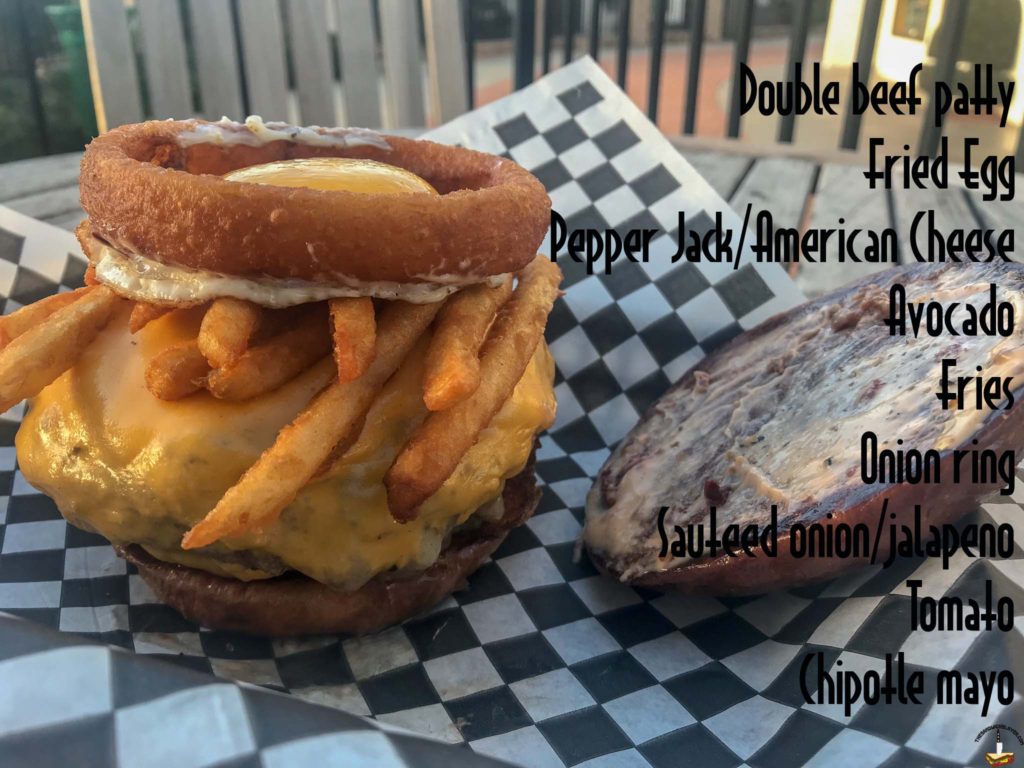 As with most high end burger joints, the Grinderz bun is big and buttery; so much so that your fingers will be a little greasy after your first bite. You’re going to need to preemptively stock up on napkins, unless you want to fumble around with buttery fingers. The edges are nicely toasted, with some crispy edges and enough heat to melt the chipotle mayo into the bun.

There are two hamburger patties mashed together and stuffed with pepper jack cheese, jalapeno, and grilled onions; That alone is enough to make me weep. Grinderz decided that it wasn’t enough, so they melted american cheese over the stuffed meat, added french fries, an onion ring, and a fried egg for good measure. It’s probably one of the most indulgent burgers I’ve ever eaten in my life. It took me a couple of bites before I realized that there are actually fresh vegetables in the burger too. Hidden under the mound of meat and cheese is fresh tomatoes, avocado, and my complete disregard for the FDA’s suggestion on daily calorie intake. One thing that burgers like this can suffer from is an overload of flavors, if there is too much going on, then everything tends to drown itself out. There was a little but of redundancy here in that regard, but what was most important (the meat) wasn’t over shadowed by the whole burger itself.

The texture was beautifully elevated by the crispy fries embedded into the melted american cheese. 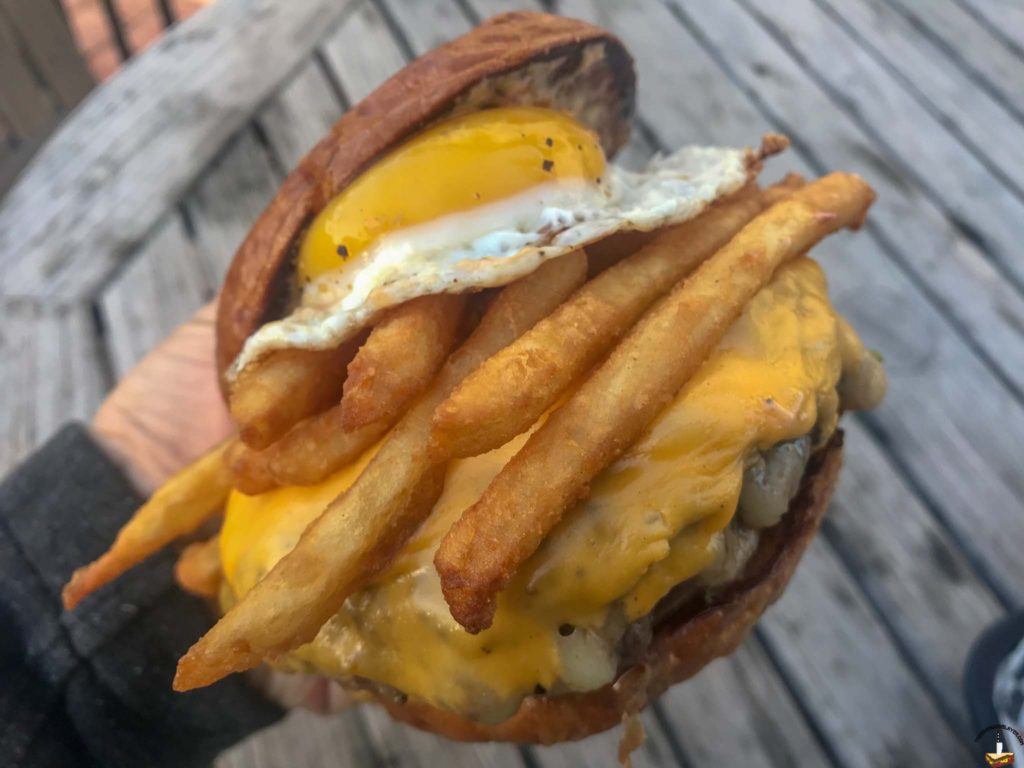 Everything on this burger provided plenty of flavor, so I didn’t feel a sauce was necessary. Grinderz uses chipotle mayo in this burger, but I didn’t really taste it. There was enough heat coming from the jalapeno and pepper jack to overpower anything the sauce provided; while the avocado and melted cheeses gave the burger a creamy/saucy texture. Suffice it to say, you could order this burger “dry” and not lose out on much.

When it comes to a simple burger with fries and a drink, Grinderz is quite reasonable. You can get a double cheeseburger, fries, and a drink for under $10. What ends up jacking the prices up is the add-ons. Whether you’re looking for some crazy decadent burger or just a simple lunch, you really can’t go wrong with what they have to offer. The people working behind the counter were very friendly and willing to guide me through the more interesting burgers on offer.

If you’re into skateboarding, be sure to check out the charity they are a part of Board For Bros.

Somehow I managed to eat that the least “old world” place at the Old World Village. Several restaurants caught my eye, so I suspect that I’ll be back again to try some of the more “traditional” fare of the area. If you ever find yourself at Grinderz, be sure to check out their Pigsty Burger, I certainly plan to the next time I’m here. 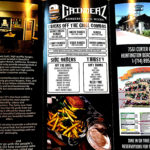