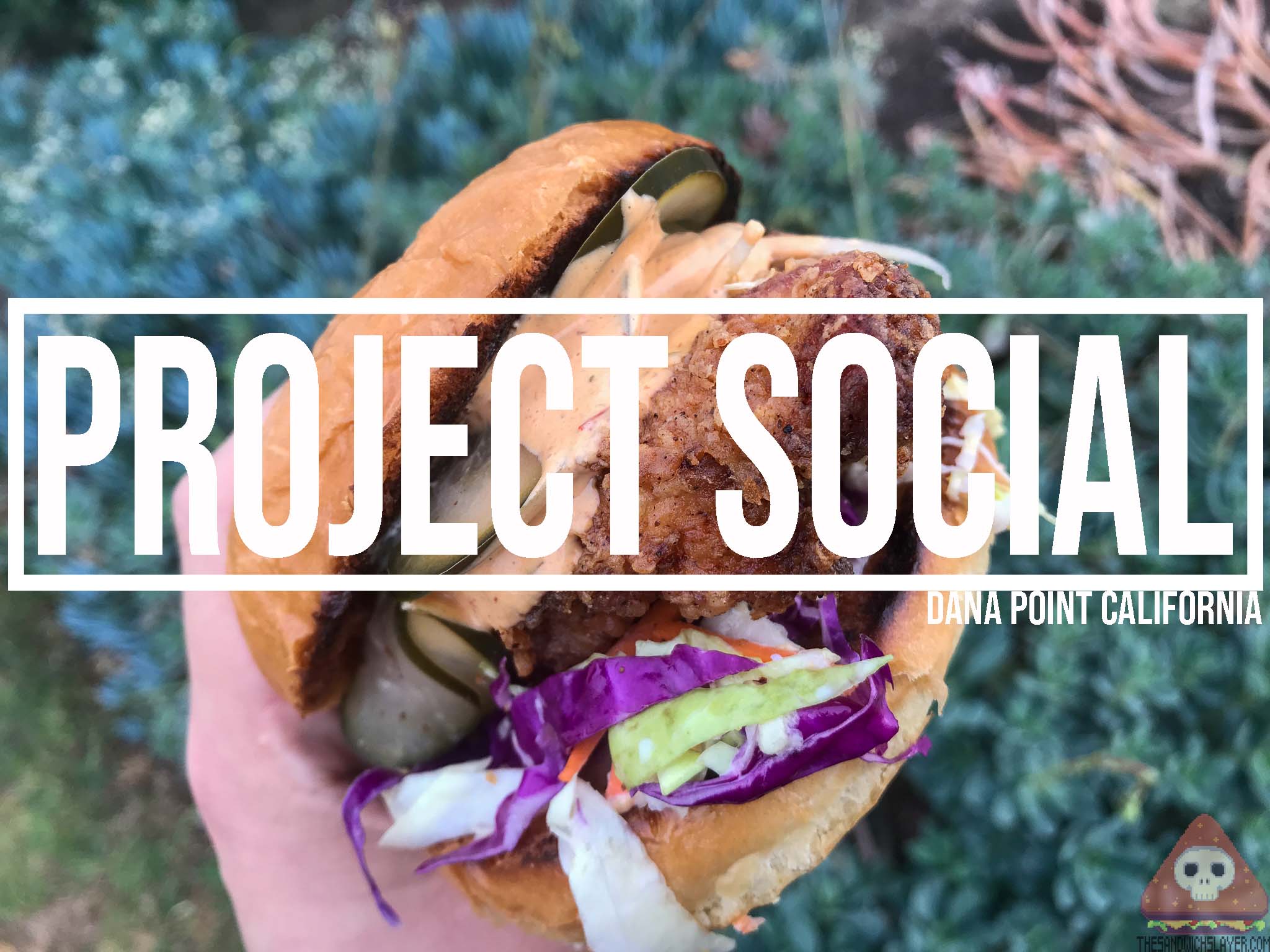 I have to say that I’ve been pleasantly surprised with South OC lately. When I first started this blog, I was living in Laguna Niguel and I found that there weren’t a lot of interesting places to eat in the area. It seems that things are turning around for the South though, as we are seeing a larger variety of restaurants opening up. Project Social in Dana Point is a beer forward restaurant with sandwiches (obviously), flatbreads, and bowls.

“The Strand” from Project Social

The Strand is served inside two toasted brioche buns. It’s lightly charred and crispy on the edges. This bun in particular is dry on the inside and buttery on the outside. It’s not my favorite, but It’s a good vehicle for holding sauce and wet coleslaw.

Project Social’s fried chicken has a very light batter, almost to the point where you don’t realize that it’s there. The edges are nicely crisp, but the batter in the middle gets soggy pretty quickly. In terms of density, it kind of reminds me of KFC’s original recipe chicken. In terms of actual flavor and texture, it blows anything that damn Colonel and his white suit could provide.

This sandwich’s flavors are a bit more subtle compared to the other chicken sandwiches on this blog. The housemade pickles are thinly sliced and just lightly brined and the apple fennel slaw is partially sweet. There is a tanginess in this sandwich that you don’t get in a lot of other chicken sandwiches, I think it comes from the thinly sliced green apple.

The Strand is lightly dressed with dijon mayo and a drizzle of honey, neither of which is a prominent flavor. I appreciate the subtlety here, because a common problem with sauces in sandwiches is that they overpower the other ingredients. The dijon mayo added some moisture and balance but didn’t detract from the seasoning and plump texture of the chicken. The honey was almost an afterthought, just coming in after the tang of the slaw hits the palate.

Just to give it a try, I added some of Project Social’s housemade Chipotle mayo to the sandwich; it did add a little zing to it, but I preferred the sauce on my tater tots more than the sandwich. (also, the tater tots are great).

Project Social’s sandwich menu will run you anywhere from $8 for a grilled cheese to $13 for The Strand. It comes a-la-carte, so if you want a side of tater tots it’s another $3. It’s pricey meal for $16 but not outrageous. I’d like to come back when it’s safe to dine in again to take in the whole experience.