I’m not going to lie, Los Angeles pisses me off. The traffic alone is enough to make me avoid the city unless I’m going to the airport (which is a chore in and of itself). Despite the highways feeling more like parking lots in L.A. there is a lot of interesting history here. Philippe the Original was opened in 1908 and has been at it’s current location since 1951. The original owner, Philippe Mathieu is also credited with creating the now famous French Dip sandwich. Like most good things in life, it all began with an accident. Philippe Mathieu dropped a sliced french roll into a hot roasting pan with the juices still in it. It was eaten by a police officer who brought his friends back the next day to have it again. The rest is history. 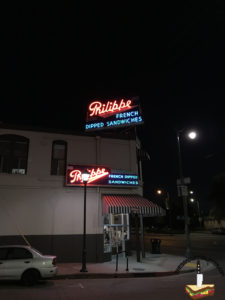 There is another restaurant nearby called Cole’s which also claims to have created the French Dip. Interestingly enough, both Philippe and Cole’s were established in 1908. According to Thrillst, it was Philippe Mathieu who likely invented the famous sandwich.

The interior of Philippe is from a bygone era. The floors are covered in saw dust and the wooden booths look like they could’ve been used as gallows in the 13 colonies. I also walked past an ancient piece of history, A thing that these damn dirty millennials will never understand: 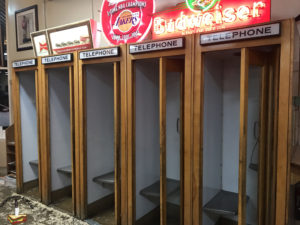 That’s right, payphones. Try accessing your instagram on that crap. You can’t even take a selfie and add a goofy ass dog filter with these things. 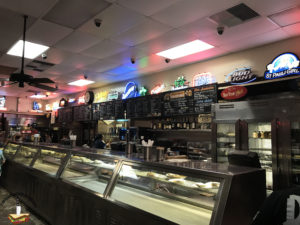 The line was long and awkward, but the food is prepared very quickly. I struck up a conversation with a couple in front of me, they’ve been coming to Philippe’s for over 50 years. His wife told me that he was the one who introduced her to this restaurant when they were dating, somehow it made me more excited to try the food.

You can choose what type of dip you want: Beef, Pork, Ham, Lamb, Turkey, or pastrami. Then you choose your level of “dip,” single, double, or wet (standard is double). Then you can add other things to it as you please. Mine was:

Sometimes the best sandwiches are the ones made with simplicity and this was the perfect example. Cheese doesn’t come on the sandwich, you have to order it, so the Swiss was my rebellious side coming through. As you can see, I like to live my life dangerously.

I wouldn’t be able to describe the flavors of the beef dip that are outside of your expectations for a dipped sandwich, other than it tasted exactly how it should. The meat was sliced nicely with a great texture and the Jus was a perfect salty addition to the crusty french roll. On the table was Philippe’s house made hot mustard, the perfect addition to any dipped sandwich. 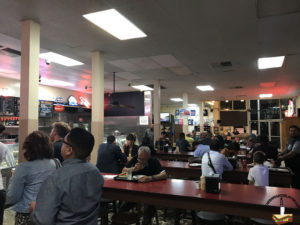 I was excited to try Philippe the Original but I didn’t realize how much I would enjoy sitting on those community tables eating my beef dip. Why? because I felt like I was experiencing Southern California from a different age. Everything from the old fixtures to the way I ordered my food felt like I was a part of something historical, talking to the couple who had been going there for 50 years made me feel the personal connection that Philippe’s had to the community.

Other French dip sandwiches may have added bells & whistles to the formula, but Philippe’s sandwich is proof positive that it doesn’t take much to make something impactful.