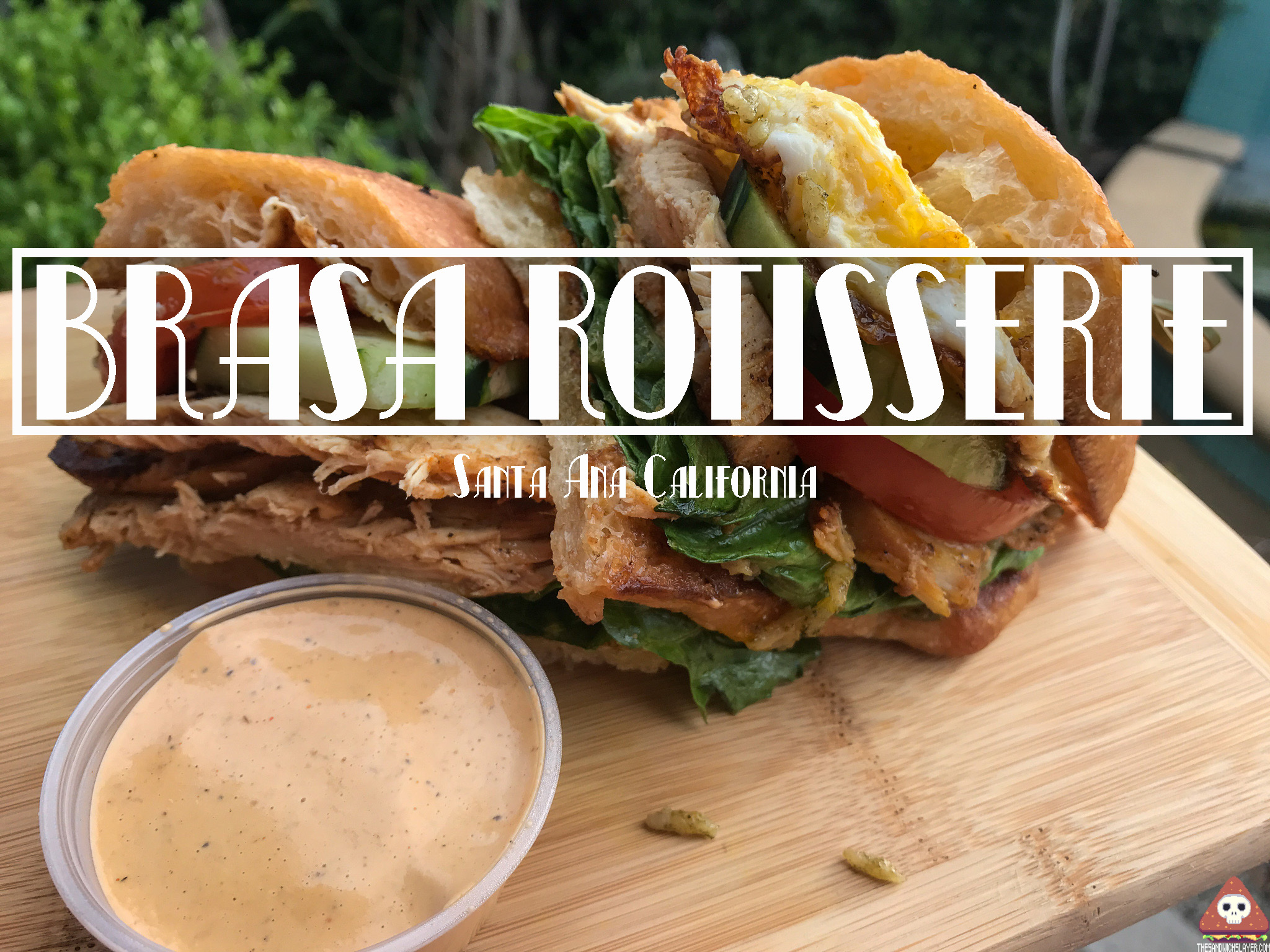 I have to admit that everything that has been going on lately has made keeping up with the blog difficult. Some of our favorite Orange County spots have been closing due to the Covid Pandemic and it’s been rough as all hell. Not being able to travel has taken it’s toll as well. With that being said, I have been trying to support local restaurants while exploring food from other cultures. It’s not quite hopping on a plane, but it’s the best we can do right now. Brasa Rotisserie is a modern Peruvian restaurant near the South Coast Plaza mall in Costa Mesa/Santa Ana: 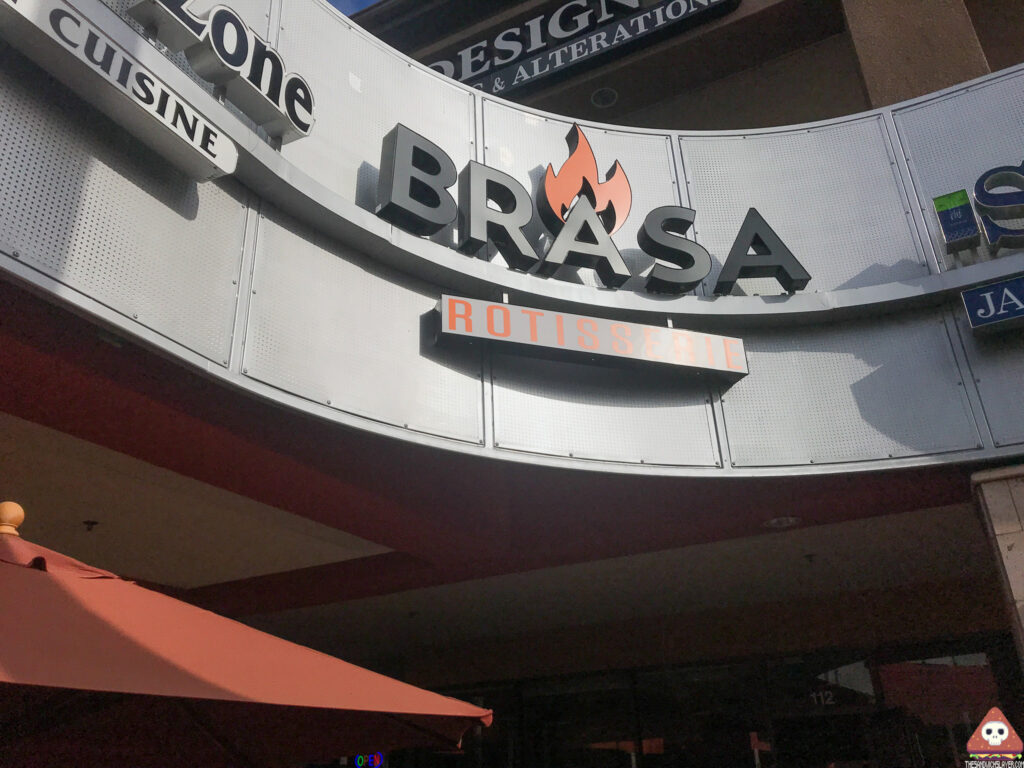 Peruvian food in Orange County is easier to find than most people expect. It’s been slowly growing in popularity over the years and I actively seek it out when I want to relive my memories of going through South America. Brasa Rotisserie changes it up a bit from most Peruvian places I’ve been to around here. It’s a more streamlined and modern menu that centers around Pollo a la Brasa: A rotisserie chicken that is cooked over hot coals (Brasa means embers in Portuguese, I know it’s not what they speak in Peru, but Brazil isn’t that far away). There is an interesting history behind the creation of Pollo A la brasa, which oddly enough started with a couple of broke Swiss people in Lima during the 1950’s.

For the record, cooking chicken over hot coals wasn’t invented by the Swiss in Peru, but the rotisserie used by Pollerias across the country was created by them. Roger Schuler and Franz Ulrich were trying to find a way to cook multiple birds for their “all you can eat” chicken restaurant that was exploding in popularity. And thus, a cultural phenomena was born, and now I’m eating it and getting juices on my keyboard. The rest is history. 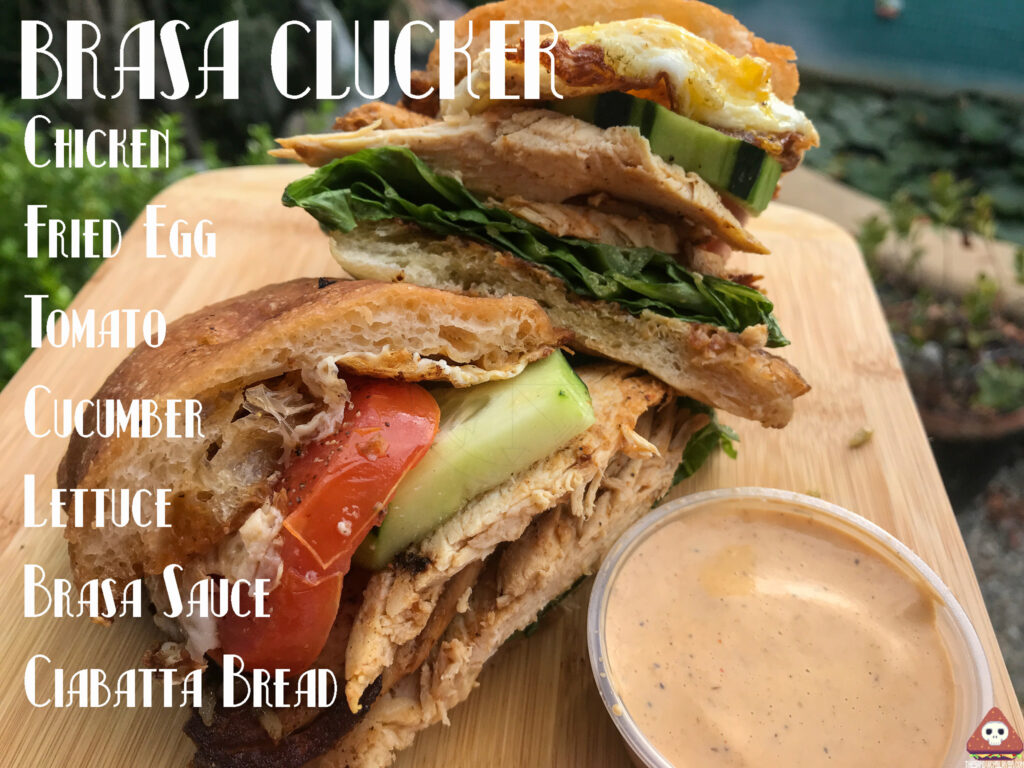 I don’t think I’ve ever been to a Peruvian restaurant that had sandwiches on the menu. Most places around Orange County serve soft bread with an herbaceous green sauce to dip it in. It’s good, but that kind of bread isn’t good for sandwiches. Part of me was worried that the bread wouldn’t be very good here, but Brasa uses a sturdy ciabatta bread for their Clucker sandwich. It’s hard outer crust is perfect for any sandwich with a runny egg in it.

I don’t think I’ve ever had a Rotisserie chicken that I didn’t enjoy. Whether it be one you get at Costco or at a restaurant like Brasa, rotisserie chicken is just good. The juices of the meat was nicely soaked up by the bread and the egg made the sandwich infinitely more substantial. I don’t know If I care for the cucumber here, but my body probably needed some vegetables in it. 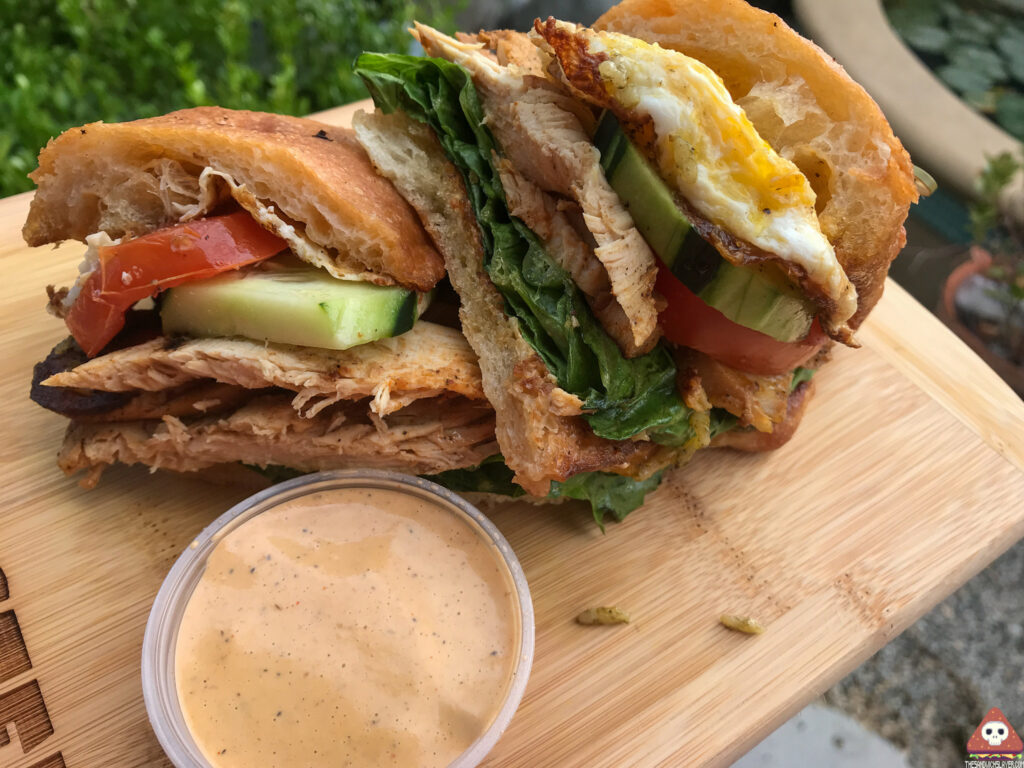 Brasa has three different sauces, all of which go great with their chicken. The sauce that came with the Clucker sandwich was a creamy pepper and garlic sauce. It didn’t look like it was spicy on first glance, so I dipped my sandwich into it. Boy was that a mistake. The sauce was good, but deceptively spicy. It hit me pretty quick and it took a minute for me to get my vision back…

All joking aside, it’s  good sauce, but if it was supposed to be as spicy as it was, order it on the side and use it sparingly.

The sandwich is $13 and comes with your choice of side. I opted for cilantro-rice, which is an upcharge of like $2. Price wise, Brasa runs a little expensive. But the food is good and it’s portion is good with the side. I plan on going back, but I may  opt to have a plate of chicken rather than a sandwich next time. I’m also interested in trying the other sauces, all of which have some peppers in them. Gonna have to bring some milk just in case… 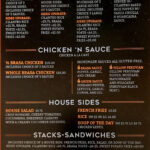