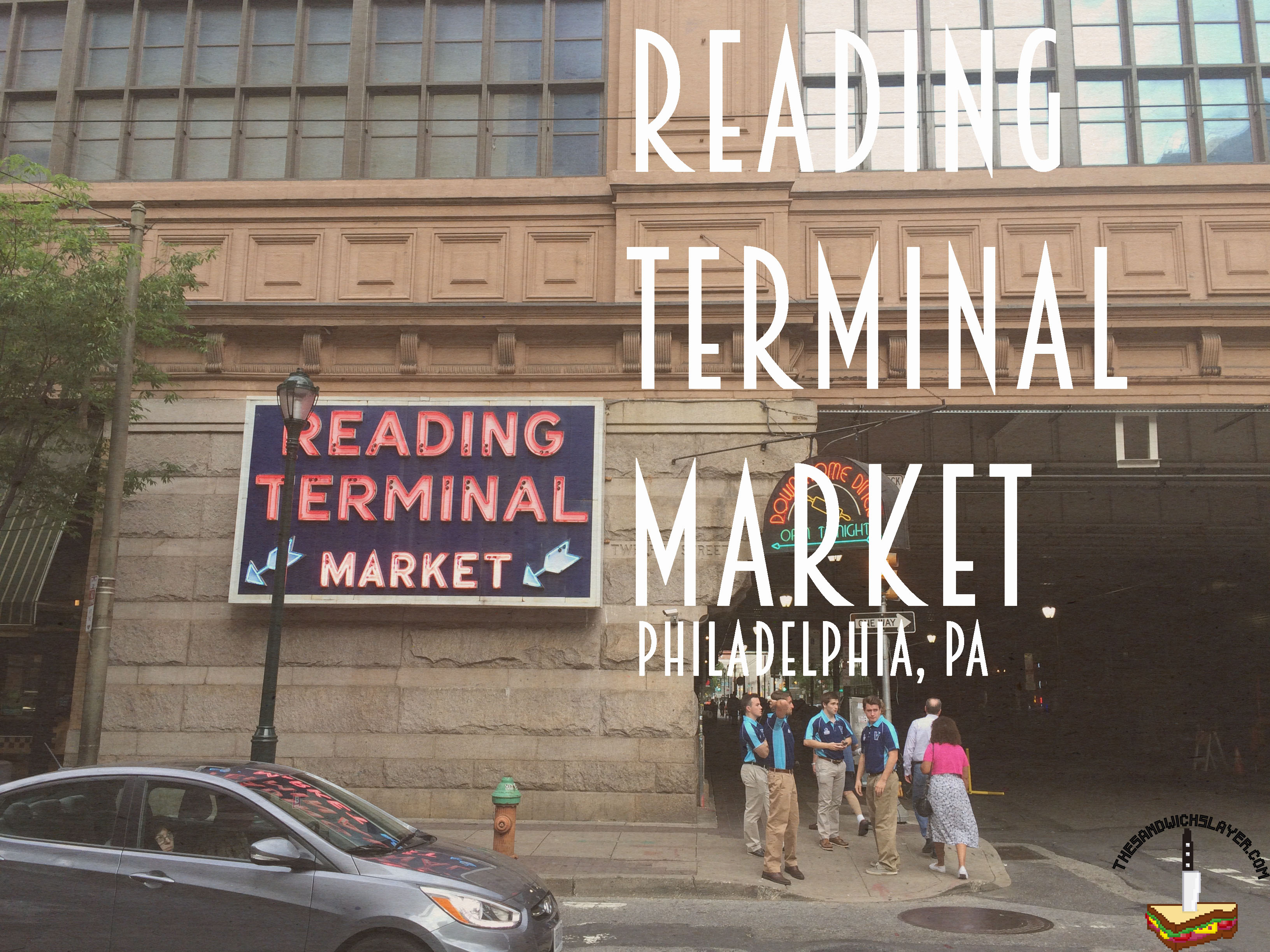 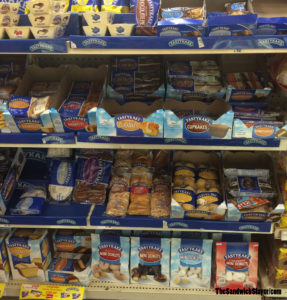 After my busy weekend in Raleigh, North Carolina I landed in Los Angeles International airport jetlagged, full, and excited for my next adventure in another city. I only had 2 nights back home before I would leave again for the city of Philadelphia, PA for the event “Wizard World Philadelphia Comic Con.” I for the life of me can’t tell you why I didn’t just request to fly directly from Raleigh to Philadelphia rather than fly back and forth from California, but I did. Suffice it to say that my body was thoroughly confused, tired ,and filled with optimism because I was going to Philly! I’m by no means an expert on their culture, but given the popularity of the “Philly Cheesesteak” I figured that I would be flying into a sandwich lover’s dream city. It certainly did not disappoint. Once again I was somewhat hampered by the fact that I had to stick close by to the convention center, but I lucked out, because I was right next to the Reading Terminal Market. 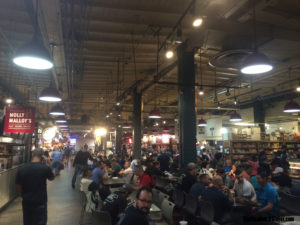 The Reading Terminal Market is a huge collection of little markets and food stalls that I explored everyday with the gittiness of a 12 year old at a Justin Beiber gift shop (he’s still relevant right?). Whatever you are looking for food wise, you can pretty much find here, boasting some of the best meals and produce that Philadelphia has to offer. I know it’s not a big deal for a lot of people, but they also have 2 parking garages that is only $4 with validation (a steal for anyone driving in the city). 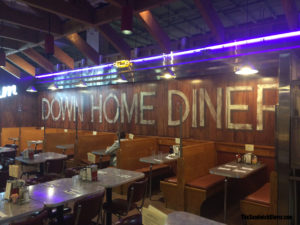 I landed in Philadelphia kind of late, so the market was closed with the exception of the “Down Home Diner” a sit down restaurant with all day breakfast and diner food (go figure). They had a cheesesteak on the menu, but I wasn’t feeling at my best due to the 7 hours on the plane, so I decided to start my Philadelphia weekend with a crab cake sandwich with “hot lava sauce” with a side of pulled pork cheese fries (Yolo). 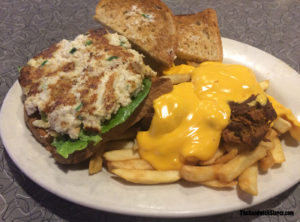 I always forget that “Cheese Whiz” and cheese sauces of that style came out of Philadelphia, which both excites & shames me. The cheese fries were exactly what they needed to be, but I which the “hot lave sauce” on the crab cake sandwich had more lava in it.

There was a section that I frequented more than any other part of the market, known as the Dutch Corner, where some of the best baked goods, sandwiches, and confections that I have ever had came from.

Miller’s twist was a quaint introduction to the amazing culinary delights that I would experience in the Dutch Corner, one that bolstered my compulsion to push past the limits of my stomach into the food coma netherworld. What would I try next? Of course it had to be a sandwich.

Hatville Deli has both a full service deli and sandwich counter. Their “corned beef special” is simple but oh so masterfully made with corned beef, coleslaw, and a housemade Russian dressing on Rye bread (served cold). The Russian dressing was some of the best I had and they piled it on for a rich and salty sandwich. It also came out in less than a minute, they’ve got this sandwich down to a science.

Looking for something small? a little chocolate covered bacon from “Pennsylvania General Store” is the way to go, of course they have tons of other chocolate morsels for you and some nice pretzels for anyone looking for a hearty snack. 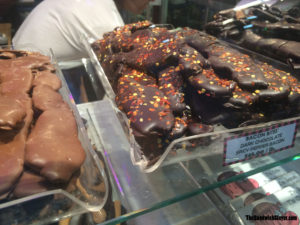 I spent a little more time in “Sweet as Fudge Candy Shoppe” where you can buy all sorts of snacks and sweets for the day. The fudge here is an absolutely decadent treat, one that could satisfy some of the most hearty sweet tooth with just several bites.

So it turns out that I was in Philadelphia during “National Donut Day” (June 3), I’m not really a donut guy,  but I felt it my patriotic duty to participate in this time honored day of celebration. The first (and only) thing that I learned when standing in line was that some people spell Donut, “Doughnut.” I ordered a standard glazed donut (a good indication of style) and a peanut butter and jelly donut (a good indication of my lack of self control). These donuts had a lighter texture than I’m used to, but the flavors were absolute decadence.

Beiler’s also has a huge bakery for other non-donut goodies, such as cakes, breads, and pastries and a pickle patch with several barrels of brine you can choose from. These places were only the minute tip of the iceberg in the Dutch Corner, so if you’re ever in Philadelphia I urge you to try more and tell me about it. 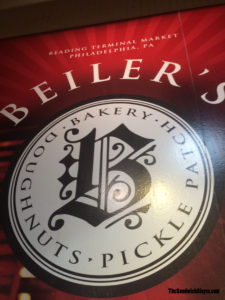 Now I didn’t just pay attention to the Dutch Corner of the Reading Terminal Market, there are hundred of places to explore and try here, so I eventually had to venture out. I, of course, had to try a philly cheesesteak, as Will Smith from “Fresh Prince of Bel-Air” spoke so well of them when I was growing up.

Let me be the first to tell you that I didn’t take many pictures of cheesesteaks, despite their delicious nature, they aren’t particularly photogenic and I ran out of space on my camera. Okay, now back to the food.

Spataro’s was my first stop.

one of 7 some odd places in the Reading Terminal where you can get a cheesesteak, I was told this was a favorite for a lot of people (although many will argue that some of the other vendors have better) and it was the first cheeseteak place that I happened upon. I wish I had more time, because I would’ve loved to try “Carmen’s” “By George” or “Becky’s Cajun Cafe”

My cheeseteak had Cheese Whiz, with grilled onions, and mushrooms. I also ordered an Italian Hoagie (for later). 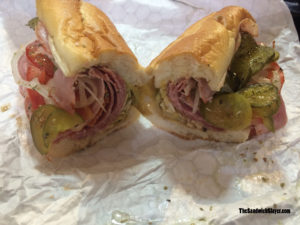 It’s a shame that I was working, because I didn’t have the time to explore much, that’s why I didn’t go to the more famous spots like “Pat’s” or “Geno’s” or “D’alessandro’s.”

With cheese on my mind & an unhealthy need to try something that would undoubtedly raise my blood pressure to hypertension I happened upon “MeltKraft,” a grilled cheese sandwich spot that also sells local artisanal cheeses. Imagine my delight when I walked past and noticed this sign: 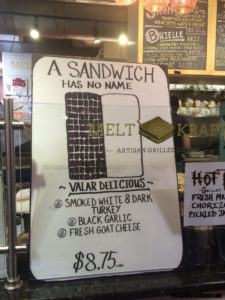 In the name of the open faced sandwich God! I found myself more excited than usual to try this place & with good reason, because it was stellar. I didn’t go with the Valar Delicious, the idea of having to train under Jaqen H’hgar or fighting The Waif for a cheese sandwich sounded inconvenient. Instead I went for “The Somerset”, with cured ham, cornichon pickles, whole grain mustard, and an aged (12-18 month) “Somerset” gruyere cheese. I decided I needed more decadence, more richness, and the kind of gluttonous indulgence that would make even the most staunch hedonists blush. So I got the somerset sandwich grilled in duck fat. 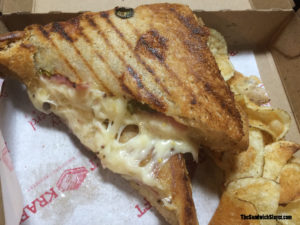 I wish I could’ve spent more time exploring the Reading Terminal Market, as I only scratched the surface of what to try. Sometime between the Dutch donuts & grilled cheese sandwiches I realized that this is the equivalent to my own “Louvre,” where I could walk around for hours and still not see and experience everything.

No doubt Philadelphia has so much more to offer than just the Reading Terminal Market, but it is a hell of an introduction into the vast food culture within a city that I long to revisit again. If you’re ever here, send me a message and let me know what your favorite food stalls were! 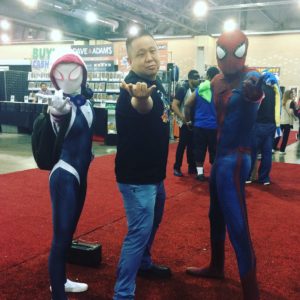 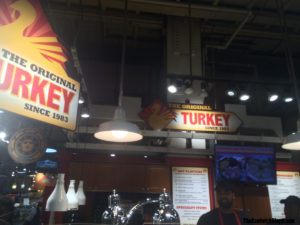 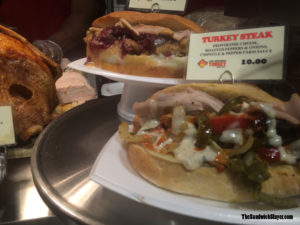 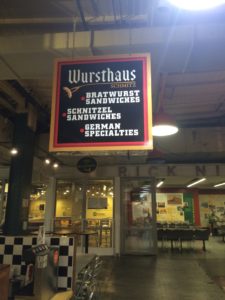 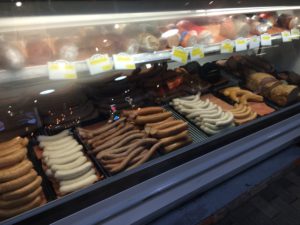